WATCH: Staffer Caught on Camera Awkwardly Crawling on the Ground Behind US Interior Secretary During Interview 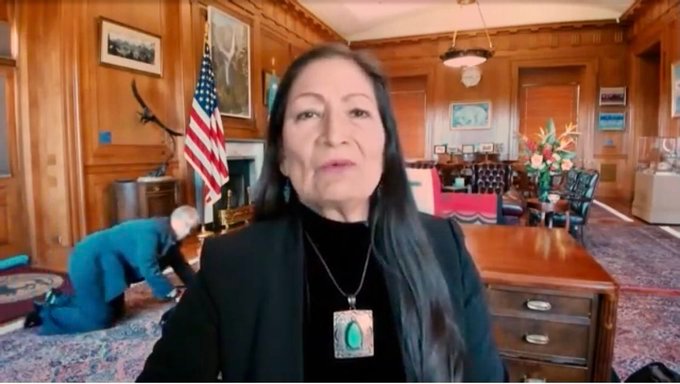 A staffer was caught on camera awkwardly crawling on the ground behind Joe Biden’s US Secretary of the Interior during an interview with “Late Night with Seth Meyers.”

Deb Haaland was speaking to Meyers about being the first Native American woman sworn into the office when the staffer appearing in the frame.

While they were clearly trying not to interrupt the shot, Meyers was quick to spot them.

“You have a staffer who fully crawled on the carpet behind you — and it is the greatest thing I have ever seen,” Meyers said. “Sir, we know you’re behind the desk.”

The man proceeded to hide behind the desk with a camera in his hands.

“Now, Secretary, be honest,”  Meyers went on. “Do you know who that man is and are those someone else’s glasses he’s wearing?”

“We don’t have people sort of sneaking around, so, yes, I know who that is,” Haaland responded with a laugh.

Haaland was confirmed on March 15.