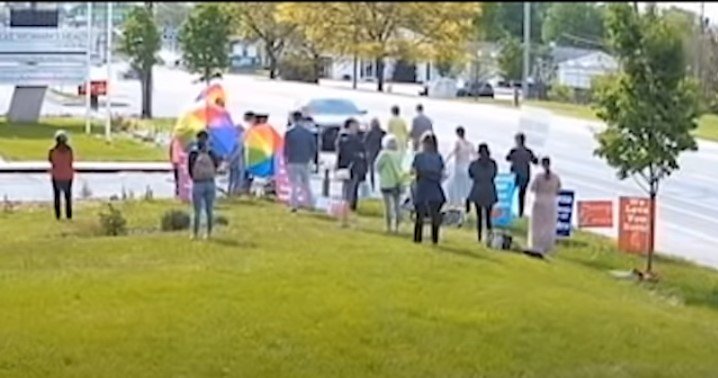 Would anyone be surprised if a member of Antifa intentionally drove a car into a group of people praying at an Abortion Clinic? With the amount of violence that is escalating from the left against Conservatives, no one was shocked when footage of that very thing went viral over the weekend.

A video went viral on social media containing footage from an incident that happened on May 15, of what appeared to be a man and woman almost being hit by a car in a small group of people in South Bend, Indiana. It was later reported that there was an investigation into the situation because the car appeared to intentionally try to strike a US House member, Representative Jackie Walorski from Indiana, while she attended an event to pray for babies at an Abortion Clinic.

On Twitter, posters from the left attempted to marginalize the incident, prepared with talking points claiming the car was attempting to make a turn into the driveway of the abortion clinic, and the driver had turned on his turn signal.   Although the driver clearly is seen on the video driving past the entrance of the business and was headed for the man and woman when he stopped short.

On Monday there is information that the man behind that wheel is a radical far-left Community Organizer and Abortion activist.

“RNM has identified the man behind the wheel as Michael Case, an Antifa activist who regularly volunteers as an ‘escort’ for women visiting the clinic to get an abortion, Clifton French reported for Real News Michiana.

“RNM also uncovered a Facebook post about the visit in which Case wrote ‘Jackie needs to learn to stay out of the street.’ You can see the post below,” French wrote, exposing the connection between Case and Walorski at the Abortion clinic, for the first time.

Walorski’s office released a statement on the investigation on Saturday.

“On Saturday, May 15th, I joined a group of pro-life Hoosiers in prayer while they gathered peacefully near a South Bend abortion clinic. As I was leaving, a vehicle traveling quickly down Lincoln Way West swerved toward the group and came to an abrupt stop just a few feet away from me. Given the recent increase in threats against members of Congress, the U.S. Capitol Police are investigating this incident.

“I stand with my fellow pro-life Hoosiers who work to defend the most vulnerable among us, the unborn. They will not be silenced or intimidated by threats or acts of violence from radical activists. As Americans, we can debate and disagree on fundamental issues, but it is absolutely unacceptable to endanger the lives of others.”

Visit French at his site to see his incredible investigation, there French posted screenshots, photos, maps, and footage that clearly show Walorski has been a target from the anti-abortion left.

Watch the original footage of the potential hit and run: