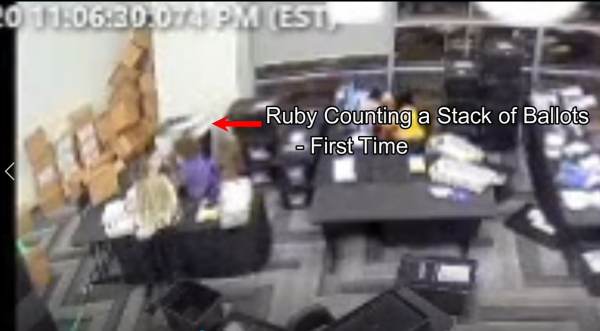 Today a judge in Georgia ruled that the audit in Fulton County, Georgia, must go on.  This leads back to The Gateway Pundit reporting in early December where we identified ballots being counted two and three times.

The Gateway Pundit first reported back on December 4th.

Georgia is headed for another audit of its presidential election results after a judge agreed to unseal more than 145,000 Fulton County absentee ballots Friday.

The details and timing of the audit must still be determined. But the plaintiffs in a lawsuit against the county want to scan and examine the ballots to determine whether they are legitimate.

At a hearing Friday, Henry County Superior Court Judge Brian Amero made clear the ballots must remain in the custody of Fulton election officials. That could prevent the kind of allegations of mishandling ballots and improper procedures that have dogged an audit of ballots in Arizona in recent weeks.

The latest Georgia audit cannot change the election results, which were certified months ago and have already been confirmed by multiple recounts. But the plaintiffs say an examination of ballots would get to the bottom of what they see as suspicious activity at State Farm Arena on election night and pave the way for more accurate elections in the future.

We nailed it in Georgia.  We identified in the video below that the same ballots were pushed through voting machines two and three times.

President Trump retweeted this story (but this was taken down by Twitter.)  No wonder there were so many duplicates in the sample obtained from the auditors in Georgia.

This was not an isolated incident in Georgia — Several internet sleuths found Georgia election officials scanned the same batch of ballots five different times in a row in Fulton County, Georgia at State Farm Arena on November 3, 2020.