Unaccompanied Illegal Children Are Being Exploited

Unaccompanied Illegal Children Are Being Exploited

COMMON SENSE: The Biden administration has been flying unaccompanied minors into Tennessee in the middle of the night without the knowledge of any governmental officials. You read that correctly: Unaccompanied minors.

These children are being transported to an airport in Chattanooga. From there, they are bused to cities throughout the Southeast.

Why would this be happening? Why the secrecy around it? Why in the middle of the night? What is the true purpose for this? Can there be a legitimate purpose or not? Is pedophilia involved?

If you took an underage child across a state line, you would be arrested. It’s a federal crime to do so. Then, why is it okay for Biden’s people to be doing this?

Where are these children now? What has happened to them? Who is responsible for knowing where they are? How many of them have there been?

As Vince Lombardi once said, “What the hell’s going on around here?”

This unacceptable situation requires immediate answers. Every single one of these children must be accounted for and questions about what has happened to them once they landed in Chattanooga. Nothing less is acceptable. 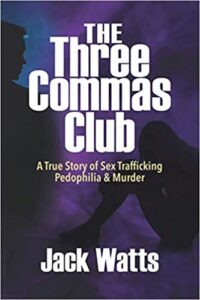 What you are about to read is true—not just parts of it but all of it. No aspect of The Three Commas Club has been fabricated or embellished. People often say truth is stranger than fiction. In the case of The Three Commas Club, this is absolutely accurate. By writing this story about sex trafficking, pedophilia and murder, I have knowingly and willingly put myself in harm’s way—in the crosshairs of powerful, evil men. I have done this to expose decades of criminal behavior and hopefully to spare future victims from the fate of being sexually exploited. This book has been written in real time. When I began, I had no idea how it would end or even if it would. What the future will hold by stepping out boldly as I have is anybody’s guess—que sera, sera. If you think my previous books have been page turners, which all of them are, you haven’t seen anything yet. The Three Commas Club is about to knock your socks off. I assure you it will.