The Advertising War On America, Feds Raise A New “Woke” Army With Ads To Create Dependence 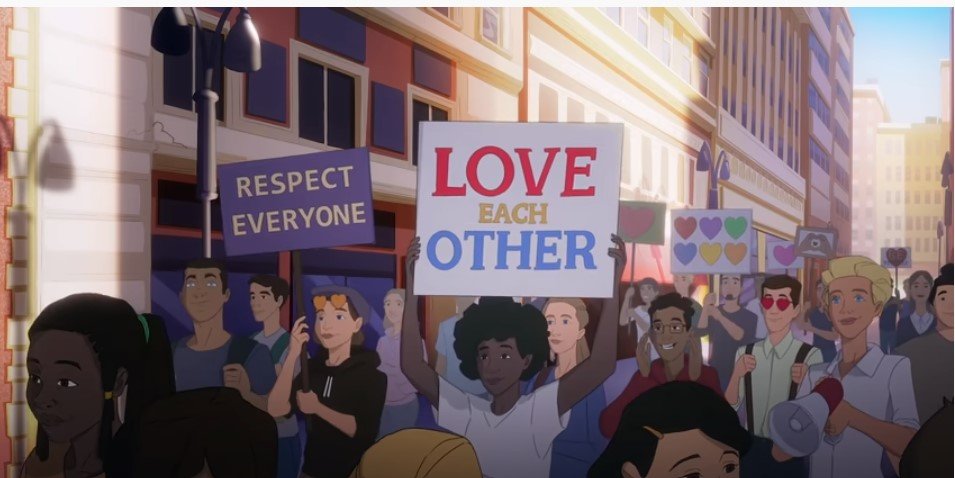 A recent shocking advertisement for the US Army shows the stark contrast between pro-American content and progressive Marxist propaganda. Never has it been more clear how the left wages the messaging war on American values using media platforms than it is now.

“Politics is downstream from culture,” Andrew Breitbart told us, and we need our own platforms to talk about culture, and now we know why The Gateway Pundit is so critical in our war for the soul of America.

As a student of political “messaging, branding and PR” at my Grandfather‘s knee, the “madman of J. Walter Thompson” who designed recruiting advertisements for the Marines and Army, I can share that these new weird military advertisements are in my wheelhouse.  My Grandfather, Loy Baxter, prepared me for this day in many ways.

Being an advertising “grasshopper” compounded by the fact that I am a former Community Organizer from Michigan who worked with Jesse Jackson and worked for a former US House member from Michigan, Democrat Congressman Howard Wolpe, I have a unique point of view about how messaging is used on the left.

Now, because of these high-profile military ads, other people may be able to connect all of the dots of how the left has infiltrated the American Republic, our important institutions and shaped the American people’s opinions by controlling the culture.

They are raising up a ‘Woke’ Military.

An earlier US Maries ad campaign (shown below)  by Wunderman-Thompson was a victory lap for the left.  J. Walters Thompson wrote highly popular pro-America military recruitment ads for 155 years, and in 2019 the organization fell to the Marxist left who had focused on them, adopted their winning tactics, infiltrated the power structure, and then destroyed them.  The same thing happened with the Army, but a little different.

Remember that the Army marketing industry is worth a lot of money and opens doors to massive power.

“The 2019 National Defense Authorization Act directed Mark Esper to submit to Congress a report on recommendations from that marketing audit concerning contract oversight and return on investment.

Esper’s general order memo also re-designated the Army Marketing and Research Group as the Office of the Chief Army Enterprise Marketing. They reassigned it as a field operating agency of the deputy chief of staff.

The Army’s marketing arm, responsible for dishing out billion-dollar contracts for advertising efforts like recruiting, is moving from its long-time headquarters near the Pentagon to Chicago to get closer to the talent, according to Army officials.

A May 30 memo by Secretary of the Army Mark Esper announced the move, which comes after the service awarded a $4 billion contract to DDB Chicago, a full-service ad agency in the city,” The Army Times reported.

FROM ‘BE ALL YOU CAN BE’- TO CULTURAL MARXISM

This ad has gone viral for its shocking content.

In my day it was all about “Be All You Can Be” in the real world, no matter your skin color, it was about character.
Now it’s about cartoons, fantasy & social experiments.
The Army’s job is to break things and win wars when directed…it’s not a petri dish for social experiments. https://t.co/F9UIWAJIiN

My Grandfather’s business files are housed at Duke University in the rare manuscript library, so I often visit them to remember what they told me about the power of marketing and advertising. In his files are notes from his secretary about meetings at the countries most important restaurants with his “Merry band of Men” in advertising, a group of WW2 veterans mostly, working for a company that had a long line of American veterans pumping out advertising content around the world.

And the left has been fascinated with the topic of these men’s lives for over 10 years, preparing themselves to use those tools for their political movements, and they have successfully done that, getting the most radical Marxists in powerful political positions.

What the left has done is reverse what J Walter Thompson did for decades, bring Globalist-Marxist advertising content into America, and stop pro-American advertising worldwide.

DEVOLUTION OF THE MARINES SHOWS YOU THE STORY:

From a  2015 article: J. Walter Thompson supports all touchpoints of the Marine Corps Recruiting Command’s advertising program, from creating multichannel brand campaigns to providing sales support to more than 3,000 Marine Recruiters nationwide through an innovative lead generation program. The Marines have the largest Facebook following of any government page, with more than 4 million followers, and boast an award-winning YouTube channel that serves content to users through a personalized Pandora-like algorithm.

J. Walter Thompson is honored to support the Marine Corps in its ongoing effort to make Marines,” said Gustavo Martinez, Chief Executive Officer, J. Walter Thompson Company. “Our shared values of courage and commitment are more vital than ever, and we look forward to the continued success of this essential institution.

We have a clear understanding of the demographic’s evolution and how to translate Marine Corps values and ethos to new generations of Americans,” said Perry Fair, President and Chief Creative Officer of J. Walter Thompson Atlanta. “The Marine Corps continues to embrace and share our pioneering spirit, and we work tirelessly to earn their business every day.”

Consider one of the last J. Walters advertisements for the US Marines shown in 2018 at the Superbowl:

And by 2019, J. Walter Thompson was underwater, according to this article.

USMC received three proposals for the firm-fixed-price contract via FedBizOpps and will obligate $79.2M upon the availability of fiscal 2020 operation and maintenance funds, the Department of Defense said Wednesday.

The contract has a one-year base period that runs through December 2020 and options that would extend work until December 2024.

Atlanta-based Wunderwan Thompson was formed through the merger of J. Walter Thompson and Wunderman.”

Wunderman was a New York City-based global digital agency. On November 26, 2018, WPP announced it was merging Wunderman with the world’s oldest ad agency J. Walter Thompson to form Wunderman Thompson, and the merger was formalized in February 2019.

THEN THE  US MARINES BECOMES MOMMY AND THERAPIST

Watch 2021 is the Battle to Belong Begins Here campaign:

” They crave belonging, community, and purpose that will make them whole,” said Lieutenant Colonel Christian Devine, national director of marketing and communication strategy, Marine Corps recruiting command. “For those few who can battle through life’s distinct and diverse challenges to earn our title, the Marine Corps can provide the doorway to authentic belonging and collective purpose this generation is searching for.”

The ad agencies will claim the new message will appeal to the young people of “Generations Z,” but there is no proof to that. And who are the people behind this ad agency? Look at some of Winderman’s recent posts about using their platform to push changes in “culture and business”; in other words, they are Cultural Marxists.

These military ads are not reflecting the American culture; they are attempting to shape and change the culture to one of dependence. And they are doing that for a powerful political purpose.

The left has successfully rerouted a massive amount of wealth to far left institutions and provided powerful messaging for far-left radical movements using our media institutions for far-left “Global politics.”

So there it is, who knew to watch the federally funded ad agencies for waging a culture war against America?