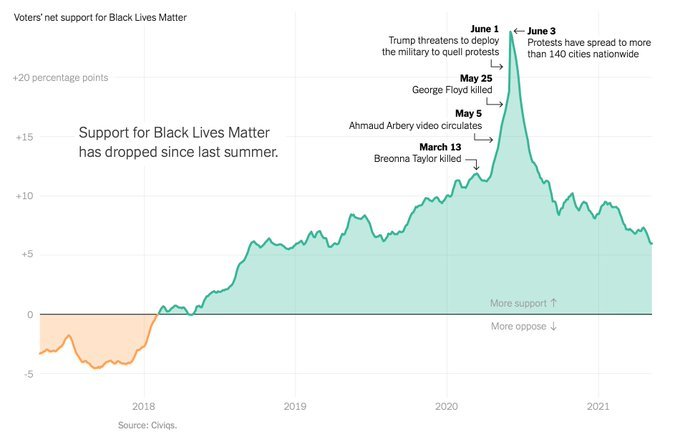 An analysis from the New York Times has found that, despite the media’s best efforts at propping it up, support for Black Lives Matter has absolutely plummeted since last summer.

Their report, which presents itself as a deep dive into why the country is losing interest in the violent movement, does not even bother mentioning the months of chaos and terrorism perpetrated under the BLM banner.

Instead, they seem to blame Americans for not going through a proper “racial reckoning.”

From NYT: ‘Support for Black Lives Matter Surged Last Year. Did It Last?’ The answer is no. ‘The data…contradicts the idea that the country underwent a racial reckoning.’ https://t.co/GL2wY9BsB5 pic.twitter.com/hlTK2xMMB3

“Notably, support for the movement peaked in the immediate aftermath of George Floyd’s death and then swiftly declined,” the New York Times article read. The decline was so significant that “Republicans and white people have actually become less supportive of Black Lives Matter than they were before the death of George Floyd — a trend that seems unlikely to reverse anytime soon.”

The decline in support was especially prominent among White and Hispanic people. As far as political affiliation goes, Republican support for the movement is now at the lowest it has ever been.

White support for Black Lives Matter surged last spring but then fell to lower than it had been pre-Floyd.

“The reason for the drop seems to be shifting attitudes among Republicans and white Americans, two large and often overlapping groups,” the NYT said.

“After Mr. Floyd’s death, Republicans reported much stronger support for Black Lives Matter than they had earlier in 2020,” write @pikachudy and @hakeemjefferson. “But perhaps even more striking is its rapid decline.” https://t.co/XhRuDHv0zE pic.twitter.com/Lr10y7FUFe

In one interesting line, the authors finally noticed that maybe a lot of the white people who were playing along with the nonsense were just virtue signaling.

“Some have wondered whether support for B.L.M., especially among white people, is genuine or merely virtue-signaling,” the report continued.

The Conservative Review noted that “Nowhere in the New York Times article is the word “riot” found. Since Floyd’s death, there were regular riots across 140 U.S. cities. The looting and property damage from the riots, many of which were carried out by BLM supporters, are estimated to be the ‘most expensive in insurance history.’ The riots result in at least $1 billion to $2 billion of paid insurance claims, according to data released in September.”