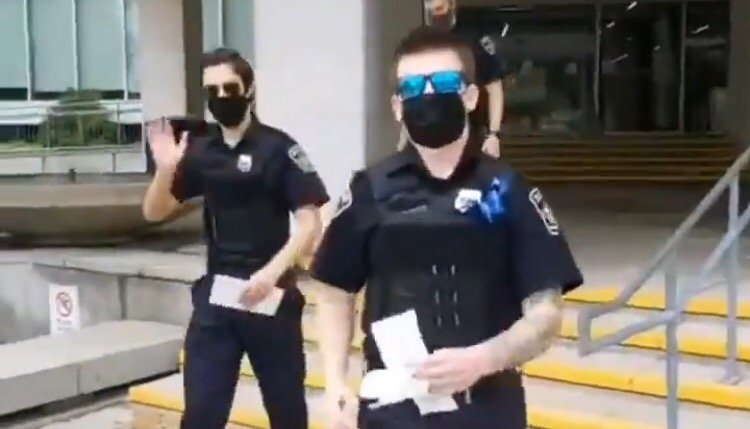 Ontario, Canada – A Rebel News reporter on Sunday was fined $1440 for reporting on a Freedom Rally and “shaking hands” with one of the attendees.

The officer walked up to the reporter and said he violated the law for getting too close to people and shaking hands.

“I have you here in violation of the ‘Reopening of Ontario Act’ gathering with a crowd of more than 5 people,” the officer said.

“So what was I doing exactly while I was talking to one of the protesters here?” the reporter asked.

“You were walking around getting within 2 meters of them…” the officer said adding he witnessed the reporter “shaking their hands.”

TWO TICKETS for a total of $1440 for simplying reporting on a Freedom Rally.

They actually said it was for “shaking hands” with one of the attendees. This is the third week of attempted intimidation. I will never back down.

The reporter was ticketed twice for a total of $1440 for the same offense.

They are being malicious ticketing twice for the same offense. I’ll be back to show our viewers the otherside of the story. pic.twitter.com/qlwqSLzpJq

Canada is arresting pastors for the ‘crime’ of holding a church service and fining people for shaking hands.