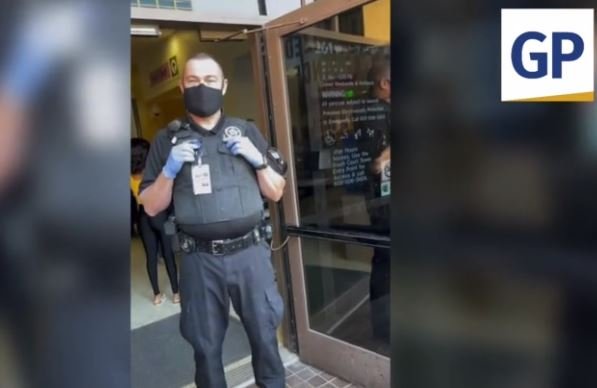 On Monday The Gateway Pundit reporter Jordan Conradson attempted to attend the Maricopa County Board of Supervisors (MCBOS) Special Meeting which was supposedly open to the public. But Jordan could not gain access to the building – or ANY building.  He was blocked at every entrance by security officials who turned him away.

As the meeting was starting Jordan found the press entrance in the County Recorder’s office and I tried to enter.  That’s when a woman came out and told him that he was not on the list to go inside the press room.  This was after Jordan told him who he was.  The woman shut the door in his face so he decided to wait outside and listen to the Livestream video.

When the meeting ended, Jordan again tried to enter the building and saw the same woman grab a security guard and point him out. They then told him, “You can’t come in through this entrance.”

Jordan then went around to the main entrance he had come through earlier in the day, and the same guard that the woman grabbed earlier came hustling around the corner to prevent him again from entering the government building. In a shocking display, the guard even denied speaking to the woman who reported Jordan.
Did she tell the guard that Jordan was a threat?

This guard sent Jordan to the attached building where the press meeting was happening.  They still refused to let him in.

Sheriff Paul Penzone, another Soros-funded Democrat, who is desperately trying to stop the audit, walked out as Jordan was trying to get in so Jordan followed him to his car asking questions but he would the sheriff would not answer.

We are reaching out to the appropriate officials for an explanation.