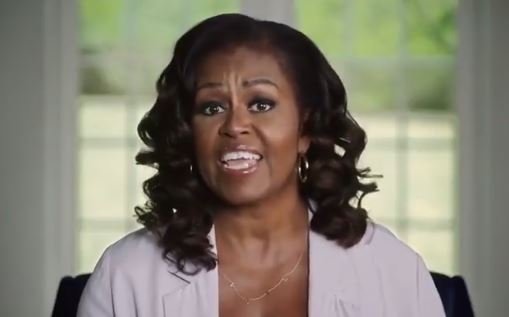 We’re just going to file this in “things that never happened.”

“As the first Black First Lady of the United States, Mrs. Obama had to withstand certain kinds of disparagement that none of her predecessors ever faced,” Poumpouras wrote. “I was on her protective detail when we were driving to a school to deliver a speech; we passed someone on a bridge holding up a shockingly racist sign directed at her.”

“I remember feeling outraged — after all, it was part of our job to protect the first family mentally as well as physically. But if the First Lady saw the sign, she gave no indication of it,” she added.

Why did the media cover this up?

Certainly the race hustlers in the mainstream media would have played video of racial slurs being directed toward Michelle Obama on repeat if there was video of it circulating.

The former Secret Service agent Evy Poumpouras says an upsetting part of her previous job was not being able to protect Michelle Obama from racist slurs or signs while on duty.

Poumpouras served on the presidential protective division for the first lady and President Barack Obama during their time at the White House. She also protected George W. Bush, Bill Clinton, and George H.W. Bush during her 12 years in the Secret Service.

Writing in her 2020 memoir, “Becoming Bulletproof,” Poumpouras recalled feeling “outraged” when seeing a racist sign directed at the first lady.

Poumpouras told Insider there was no protocol in place for dealing with spoken or written forms of racism.

“I could do nothing,” she told Insider. “There’s freedom of speech in the United States, and even if I personally feel that speech is wrong, the law doesn’t give me the power to take that person’s speech away.”

Poumpouras added that the only way she would be allowed to intervene would be if she thought the first lady or president was in danger of physical harm.

Many of you are asking why I didn’t name the Secret Service Agent if this is true. So here you go: her name is Evy Poumpouras. https://t.co/AtoOs358aT