(Natural News) Imagine a fleet of CDC drones hovering near your home, sniffing the air for “covid particles” by using on-board PCR testing equipment. Using a CT setting of 45, the drones report that your front porch “tests positive” for covid, yet there’s no record that you have a vaccine passport at your reported address, recorded in a government database. Within seconds, an AI-powered cyborg humanoid robot arrives at your address in a driverless vehicle. It walks to your front door, knocks aggressively and announces in a robotic voice, “This is the CDC rapid response team. Have you been vaccinated?”

This is the future envisioned by the Johns Hopkins Bloomberg School of Public Health, as described in a new report entitled, “Technologies to Address Global Catastrophic Biological Risks.” (Link to the PDF)

Once the CDC cyborg breaks in your front door and captures you by force, you will be injected with a self-spreading vaccine that Johns Hopkins describes as:

Self-spreading vaccines are genetically engineered to move through populations like communicable diseases, but rather than causing disease, they confer protection. The vision is that a small number of individuals in a target population could be vaccinated, and the vaccine strain would then circulate in the population much like a pathogenic virus, resulting in rapid, widespread immunity.

Of course, when they say “immunity,” they mean extermination. “Immunity” is now the new code word for mass depopulation via weaponized vaccines.

Spiking the food supply with vaccines hidden inside bacteria

Bacteria can be genetically engineered to produce antigens in a human host, acting as a vaccine, which triggers immunity to pathogens of
concern.

The same report touts the benefits of “self-amplifying mRNA vaccines” which are essentially self-replicating vaccines that can never be stopped, because they continue to multiply in the population, completely without any controls or boundaries. Johns Hopkins authors celebrate the idea of how the SAM vaccine create “a viral replicase for intracellular amplification of the vaccine,” allowing the SAM to “self-replicate” and infect others.

Nowhere in the report are any risks of such dangerous, self-replicating technologies ever mentioned. It’s as if the very idea of the Precautionary Principle is now verboten in the post-covid world of science gone mad.

Molecular 3D printers can churn out spike proteins on demand, filling the air with bioweapons

The same report also touts the idea of molecular 3D printers which can churn out spike protein bioweapons in remote locations, instantly spreading “antigens” — which are actually bioweapons — to presumably “vaccinate” remote populations that tried to escape the vaccine mandates of the cities.

Run to the hills, but the CDC drones — equipped with thermal cameras to find humans — will still find you and “vaccinate” you.

Johns Hopkins also wants satellite networks to spy on backyard gardens to spot illegal food production operations, no doubt dispatching drones with glyphosate sprayers to exterminate such illegal gardens. The food supply must be made “safe” by government centralization and control, didn’t you know? Backyard gardens are “dirty” and maybe even a health hazard, they’ll say.

Here’s a chart from the Johns Hopkins report, revealing how they’re going to cash in ($$$) on each of the technologies to mass murder billions of human beings: 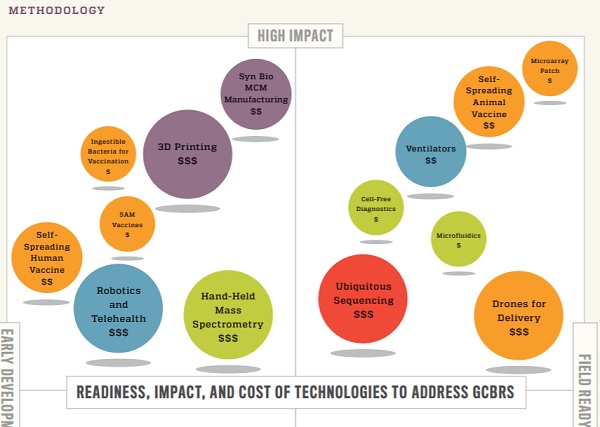 Technology is used to enslave and destroy humanity, not to empower anyone other than criminally insane government control freaks

This is the vision of the future that now typifies the criminally insane scientists, doctors and medical lunatics who are running the covid vaccine holocaust. There are no longer any ethical limits to their desire for mass death and power over all the survivors. No amount of surveillance is considered too great. No degree of intervention is too dangerous. No pause is ever entertained. This is mad science, driven by the criminally insane, seeking total domination over all humanity, no matter what the cost to freedom or civility.

In the name of “halting pandemics,” they spread them, then they use the crisis to enslave humankind under their totalitarian medical regimes. Technology is never deployed to increase freedom, prevent disease, improve the quality of life or empower truth-tellers. Rather, every piece of technology they can get their hands on is deployed to crush human freedom, destroy human lives and silence dissent.

They want humanity to be sick, weak and starving. Only then can they drive people into the covid concentration camps and vaccine death agendas that will fulfill their globalist goals of mass extermination.

The medical dictatorship is here: OBEY and you die, RESIST and you will be killed

The medical dictatorship has arrived. You are living in it right now. Big Pharma global death machine now controls the media, Big Tech, universities, medical journals and the entire field of medicine. Their instruments of death — bioweaponized covid vaccine injections — are distributed right to your local pharmacy down the road, and they are carrying out nationwide mass murder in every pharmacy in the nation, in broad daylight.

The Nazis couldn’t have dreamed of such an efficient extermination machine. Now, Big Pharma and its complicit collaborators have delivered it in 2021.

If you ever wondered how the Nazis rose to power and garnered so much support from the German people, just look around you. Walk into a corner pharmacy and see the death injections being administered each and every day. Talk to any mainstream doctor and they will insist you take the death shot. Visit any morgue and you’ll find an accelerating number of dead bodies, but none of them will be labeled as deaths from vaccines. Fact: VAERS is now reporting a nearly 4000% increase in vaccine deaths in 2021 (so far) versus the entire year of 2020.

The vaccine holocaust is here, and all the propagandists — “journalists,” doctors, pharmacists, corporations — are complicit in the mass death agenda. They’ve all signed up to be good little medical Nazis, and though their own lives may be extinguished from the vaccine, they feel as if they are part of something powerful and important for the world … just like what the Nazis felt when they were recruited to exterminate millions of Jews.

Except now, we’re all the Jews. We’re all being targeted. We’re all being threatened and scolded if we don’t participate in their Josef Mengele mad medical experiment known as covid vaccines. And only the wise and courageous will survive all this.

Don’t sacrifice your life to the criminally insane doctors, pharmacists and propagandists who are running the vaccine holocaust. Listen to my urgent Situation Update podcast here to get fully informed. And you just might live through this global genocide: