Maria Bartiromo and Devin Nunes on COVID related Dr. Peter Daszak Who Was Involved in the Origins of COVID-19 and Is the Only American in the WHO’s Investigating Team 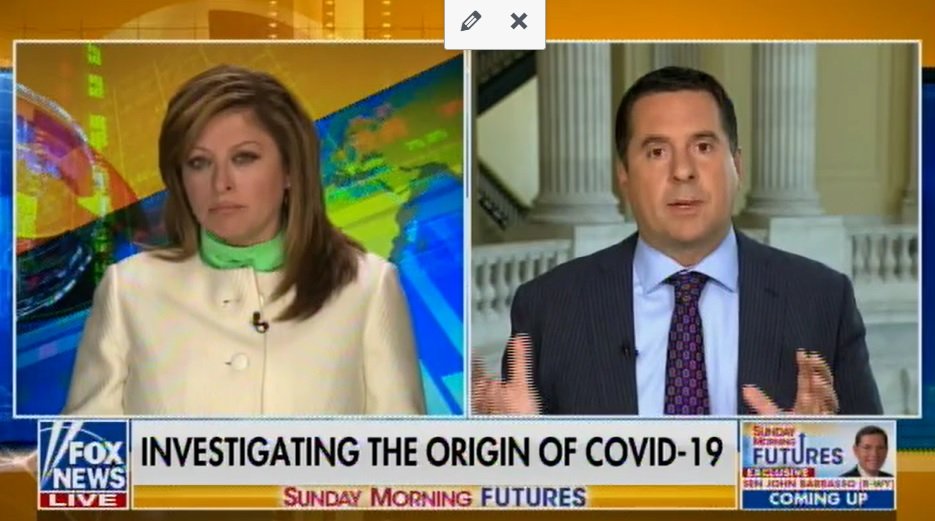 The great and beautiful Maria Bartiromo had the hero who challenged the Mueller scam, Devin Nunes, on her show this morning.  The topic of Peter Daszak and his attacks on Bartiroma were discussed.

Maria and Nunes discussed the possibility of the US funding research into COVID-19 like viruses to be used potentially for military warfare.  Both found it hard to believe that the government would use taxpayer money to fund this.  Nunes suggested that the government entities might have used Democrat ‘Non-Profits’  to funnel government money to causes like this.  Then Maria shared:

Maria:  Yeah, and the non-profit was the Ecohealth Alliance, run by Peter Daszak, who by the way tried to trash me on Twitter when I said on this program it’s likely this came from a lab.  He’s one of the people involved, correct?  He was also on the Wu team, the WHO team rather?

We’ve reported on Dr. Daszak a number of times.  Most recently we pointed out that the Dr. was conflicted due to this activities related to COVID-19 and the players involved and yet he is the only American on the WHO team ‘investigating’ the origin of the Wuhan virus.

We’ve reported quite a bit about the good Dr. Daszak.  Here’s  a recent post:

Insane Biden Wants to Rely on China, the WHO (Led by a Ranking Member from a Terrorist Nation), and a Conflicted US Doctor, to Investigate COVID-19 Origins

We know the following right now: 1) Dr. Daszak was involved with the Chinese in the efforts leading up to the Wuhan virus being released on humanity; 2) Dr. Daszak is the only person from the US on the WHO investigation into the origins of COVID-19 (making the results tainted no matter what is reported), and 3) Dr. Daszak challenges accusations against him.

Funny how the dirty birds always sing the loudest.