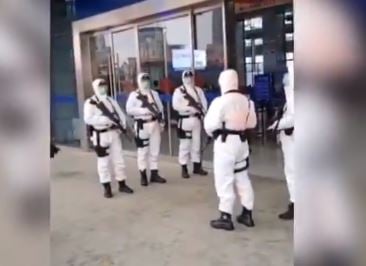 Mainstream media wakes up and finally reports on individuals in Wuhan who fell ill with the China coronavirus (COVID-19) in late 2019.

Many times the things we report at The Gateway Pundit are months ahead of the mainstream media’s reporting.   This again is one of those times.

In April of 2020, we reported on evidence from Chinese officials that the Wuhan Institute was a source of the coronavirus through February of 2020.

Within our article we used various reports coming out of China that supported our headline.  One item we reported was in relation to three individuals who worked at the Wuhan Institute of Virology who had contracted the coronavirus:

In mid-February it was rumored that the female graduate Huang Yanling who was patient zero with the coronavirus had died.  In addition, two students who worked at the Wuhan Institute had their profiles and images removed from the records of the institute.  When confronted, the Institute first claimed the students weren’t students there and then they claimed that they left and couldn’t be located.

We also added the image below from our friend Yaacov Apelbaum at the Illustrated Primer: 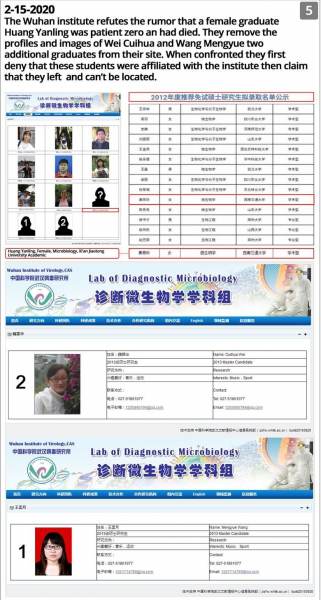 Over the weekend Big Media or Mainstream Media finally reported on our finding from more than a year ago.  The Wall Street Journal reported:

Three researchers from China’s Wuhan Institute of Virology became sick enough in November 2019 that they sought hospital care, according to a previously undisclosed U.S. intelligence report that could add weight to growing calls for a fuller probe of whether the Covid-19 virus may have escaped from the laboratory.

The details of the reporting go beyond a State Department fact sheet, issued during the final days of the Trump administration, which said that several researchers at the lab, a center for the study of coronaviruses and other pathogens, became sick in autumn 2019 “with symptoms consistent with both Covid-19 and common seasonal illness.”

Maybe in another year, the corrupt media will realize the Mueller gang was crooked and the 2020 Election was stolen from President Trump who received the most valid votes for President in US history.