Low IQ Maxine Waters: Trump Camp Organized Jan. 6 Events Along with Proud Boys, Oath Keepers, QAnon and the KKK — BUT NOT THE FBI! 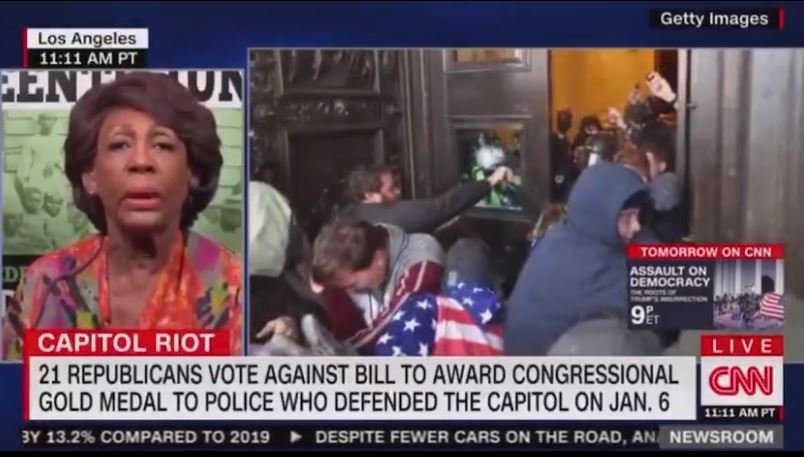 Low IQMad Maxine was on CNN this weekend and she was as crazy as ever.

Waters blamed the Trump Campaign, the Proud Boys, the KKK, the Oath Keepers and Qanon for the protests in the US Capitol on Jan. 6 that resulted in the shooting death of Trump supporter Ashli Babbitt.

Of course, this idiot woman has no idea what she’s talking about — as usual.

But when asked if the FBI was involved in planning the attacks and running operatives inside the organizations supporting Trump she denied that.
Of course.

TRENDING: VIOLENCE BREAKS OUT at Denver Conservative Conference as Hundreds of Antifa Militants Threaten And Harass Drivers and Guests Outside Hotel

There were zero Trump rallies that turned violent during that same time period.

Then on January 6, after one million Trump supporters rallied with President Trump at the Ellipse outside the White House, some 900 individuals went inside the US Capitol. Over 400 have since been arrested, including those who were waved into the US Capitol by the police standing at the exits.

Since January, the Deep State and Democrats will not release videotapes to Republican lawmakers from January 6th inside or outside the US Capitol.

Earlier this week Revolver News published an important piece on the “unindicted co-conspirators” in the Jan. 6 attack who were never charged by the DOJ or FBI for their part in the violence on Jan. 6.

The “unindicted co-conspirators” were frequently the most violent and leaders of the assault on the US Capitol. They are also likely FBI informants.

We also reported earlier this week that we have proof that the FBI was actively recruiting military members to infiltrate and spy on the Oath Keepers and Proud Boys before the Jan. 6 protests.

On March 23rd, The Gateway Pundit posted this article on former Green Beret Jeremy Brown – in this report, Brown provides evidence that he was recruited by the FBI:

CAUGHT ON VIDEO: FBI and DHS Attempt To Recruit Former Green Beret to Infiltrate and Spy on Oath Keepers, Proud Boys – But He Recorded The Conversation!

Attorney Ty Clevenger received a letter from the National Security Agency (NSA) this week.  In the letter the NSA promised to provide records related to the FBI’s illegal spying on Americans.  According to the NSA the FBI was illegally spying on 16,000 Americans.

We hope to report more on this stunning revelation soon.