The rally featured guest speakers such as AZ GOP Chairwoman, Kelli Ward, and Reps. Paul Gosar and Andy Biggs. They all spoke about securing America First principles, which starts with securing our elections.

After the event, Conradson had the opportunity for a quick interview with Reps. Greene and Gosar.

Conradson: Why do you think it is that so many Republicans are afraid to speak out like you do, in support of this historic Arizona audit?

Greene: I really don’t know. That’s a question I can’t answer for them. I think that Republicans should be speaking out for it because this is what the people want.

Conradson: What do you think of interference by the MCBOS, SOS Katie Hobbs, and intimidation tactics by the DOJ?

Greene: Just like I was saying to the fake news media over here, I was telling them that what they need to remember is that it’s the people that this government serves, states, and the federal government. And that it’s the people that pay the taxes that pay for all of the elections. They shouldn’t be interfering and trying to stop what the people want. So yeah, all these intimidation tactics are just classic Democrat moves, and probably funding from George Soros.

Conradson: This is an America First rally. It’s all about nationalism. When I was in sixth grade, nationalists were the good guys, you know, the ones that wanted to form a more perfect union. Today, nationalists are the bad guys, The Neo-Nazis, The Fascists. What changed?

Greene: Well,  you know, The Democrats. They just want to use their messaging and label everyone as something bad. So, they just want to tear you down. They want to tear down what ‘America First’ means. They want to tear down what it means to love your country. They want to shame all of us and call us all kinds of nasty names, white supremacists, and racists. You know all of the -ists and the -phobias and all these garbage names. But there’s one thing that we do know about all of us and we know about America First is we don’t buy into any of that and we dont care how much name calling they want to say or whatever they want to do, we all love eachother and we could all care less. We’re one big family.

Greene makes an excellent point. We pay taxes that pay for OUR elections. Why are they defying our orders for election integrity?

Conradson then asked Gosar “Why do Democrats cheat?”.

Gosar: Why do they cheat? Because they can’t win otherwise. 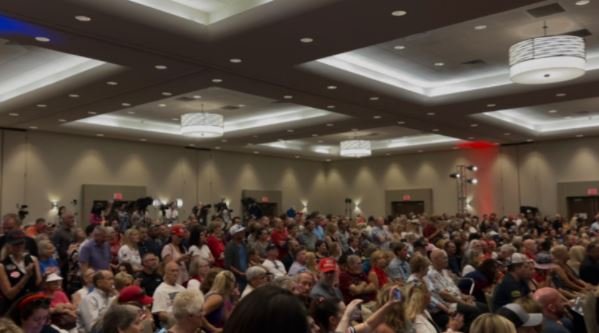 First to speak was Chairwoman Kelli Ward who ensured us that “The Republican party of Arizona is THE America First Party in America”, and cheered on the Arizona audit. 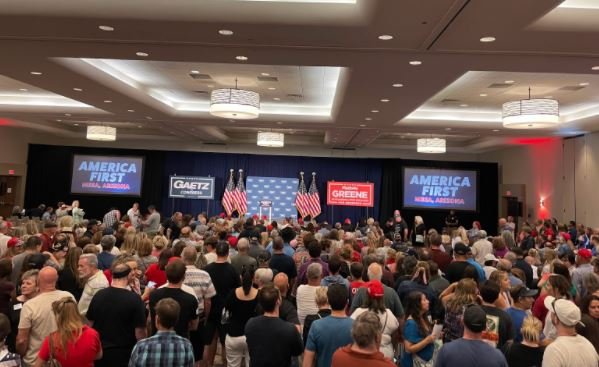 Ward: Arizona is leading the way. We are the tip of the spear, people. We are standing up for what is right, what is true, what is good. We are doing the first-ever in the history of our country full forensic audit of the election. This audit is going to give other states the courage, the passion, the wisdom to follow in our footsteps. I certainly hope to see Georgia, Michigan Pennsylvania, Wisconsin, Nevada, follow, follow, follow and find out what happened in 2020. We have to see what the irregularities, the mistakes, and if there was outright fraud, WE GOTTA FIND IT!

Representative Paul Gosar followed up and let Arizona know that everyone is watching.

Gosar: The eyes of the united states are watching. Every day at least 10 of my colleagues in other states say “how is the audit going in Arizona?”. We’ve gotta pursue and push. This is where ‘We the People’ will not be turned away… We should be keeping our promises to the people to make sure that everything is transparent. So when I cast my vote, I know it surely is going to go for that person that I voted for. It will be up to us. Think of the judge in Fulton County, looking at us, watching what’s happening. You watch what’s happening in Michigan, Wisconsin, and Pennsylvania. Mike Kelly from Pennsylvania, every day he comes and talks to me “Paul what do you hear, what do you hear”. So the eyes are on Arizona.

Biggs: He kills The Keystone Pipeline. He makes us energy-dependent. For the first time in a generation, Donald Trump had made us energy independent. Donald Trump gave us operation control over the borders. Joe Biden has allowed more people to enter this country illegally in the last two months than live in the city of Mesa. When President Trump was in power, he brought stability and peace to The Middle East. He gave us the Abraham Accords. He brought us normalized relations between Isreal and the Arab States. They said it couldn’t be done. Do you know what Joe Biden gave us? A shooting war in The Middle East.

Marjorie Taylor Greene ignited the crowd when she took the stage. She spoke on the horrors she has witnessed in the house, Outing RINOS, the next rally location, and she weighed in on the nationally watched AZ audit.

Greene: Matt and I were talking and we were like  “where do we want to go” and we want to go everywhere believe me. Oh, and let me let you know something! If you text rally to 89477 and let us know where you are, we would like to bring our rally to your town.

They’re trying to stop you. They do not want you to do this audit. The Democrats are trying to stop you. The DOJ is trying to stop you. The DOJ has no business in state rights. Here’s what we need to remind them. It’s our country and you’re the taxpayers. So I gave a little speech on The House Floor, this weekend, and part of my speech was explaining to Congress how Congress doesn’t create revenue. They don’t provide a good or service. They take it through taxes from you all. Right? Congress is kind of big on themselves. So the Arizona taxpayer pays for the elections, you pay for the ballots, you pay for the machines, you pay everybody’s salaries. That means you’re the customers, right? So if you want to audit your elections and you want to take a look at what you paid for, no one should have the right to stop you. That’s just common sense. There’s not a lot of common sense in Washington. 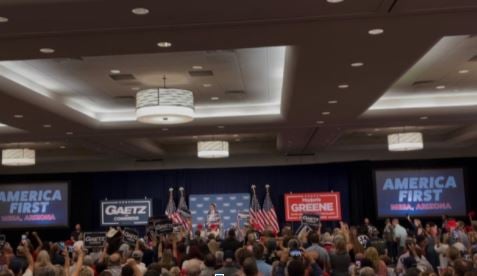 Finally, Matt Gaetz came out with an electrifying speech that praised Arizona’s great Republican leaders as he spoke on election integrity and keeping this historic movement alive. He also acknowledged the 2,000 patriots outside that were not able to get inside.

Gaetz: We are working to make elections better. Not just to right the wrongs of the past but to ensure that we have a better future, that we have elections we can count on, boards we can trust, that we have voter ID… If the Queen of England knows that voter ID is not racist, maybe the America Last media would realize that voter IDs are not racist… Governor Ron Desantis fired the elections officials. We have real requirements for voter ID. We do not indiscriminately just mail out ballots to people that did not request them and as a result, we have cleaned up our act in Florida and it is my belief that Arizona will be the Launchpad for elections audits and election integrity all over this great country. Georgia, Pennsylvania, Michigan. One group that I don’t mind standing up to, one group that I don’t mind having a little oversight over is the Biden Justice Department. The Biden Justice Department has sent a threat to your senators, that if they continue to pursue an investigation, and evidence, and subpoenas, and documents, and servers, and passwords that you could be violating the peoples’ civil rights. Who in the hell is doing this at the Biden Justice Department? It is actually a woman named Dr. Pamela Karlan, who was one of the partisan impeachment witnesses.