Is Wuhan University’s Animal Laboratory the Origin of the COVID-19 Pandemic?

The COVID-19 virus was made in a laboratory in China and was part of the Chinese People’s Liberation Army’s (PLA) biological warfare program.

That much is clear. The matter yet to be resolved is the manner of its release, whether accidental or deliberate.

There is growing evidence of a laboratory accident occurring in November 2019.

Although lacking confirmation, there remain persistent rumors of a deliberate release of the COVID-19 virus by the PLA, one scenario being at the 7th CISM Military World Games held in Wuhan from October 18–27, 2019.

In my May 20, 2021 Gateway Pundit article, I cited a source inside China claiming:

There are two important points to remember regarding that information.

First, the PLA Eastern Theater Command, whose headquarters is in Nanjing, is the same entity, which isolated ZC45 and ZXC21, the bat coronaviruses Chinese whistleblower Dr. Li-Meng Yang says provided the backbone for the laboratory manufacture of the COVID-19 virus.

Second, the non-human primate tests, likely led by Wuhan Institute of Virology scientist Chao Shan, were probably not conducted in its Biosafety Level 4 laboratory in Jiangxia District, but at Wuhan University’s ABSL-3 animal laboratory in Wuchang District, the epicenter of the early outbreak.

Even the “Bat Woman” Zheng-Li Shi of the Wuhan Institute of Virology said that the Jiangxia Biosafety Level 4 facility did not use non-human primates before the outbreak. 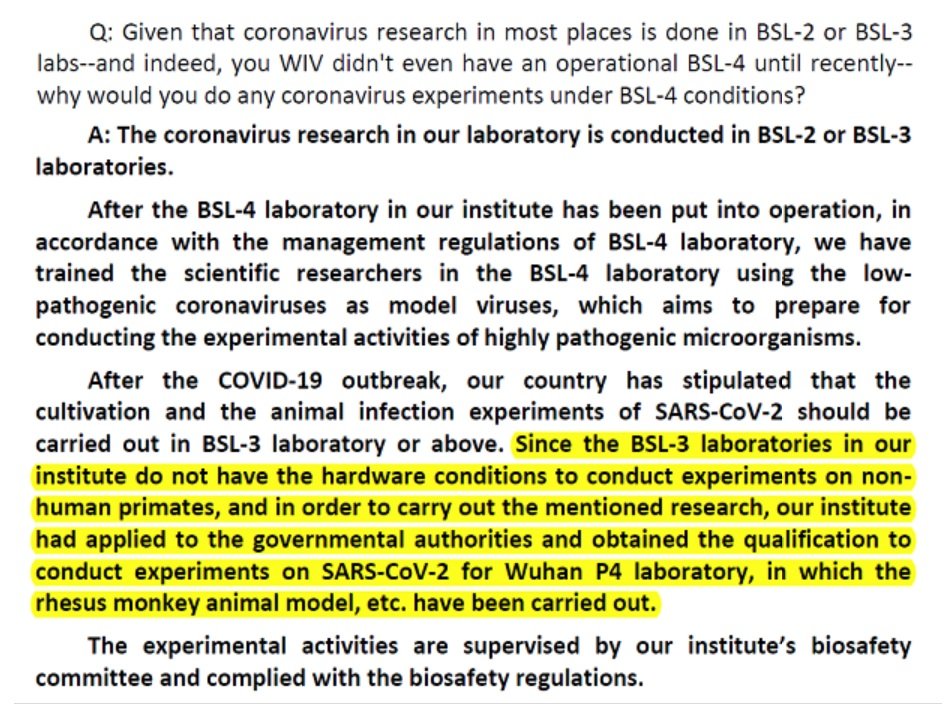 In addition, the presumed leader of the COVID-19 non-human primate experiments, Chao Shan, lists his professional address, not at the Biosafety Level 4 laboratory in Jiangxia, but at the Wuhan Institute of Virology’s Biosafety Level 3 facility on Keji Road, close to Wuhan University’s ABSL-3 laboratory.

Additional evidence, some of which may be considered “smoking guns,” has now emerged supporting the contention that the COVID-19 virus might have been released from the Wuhan University’s ABSL-3 animal laboratory while conducting pathogenicity and transmissibility studies, perhaps infecting workers in that facility.

“After investigation, no falsification was found, but many papers were found to have the misuse of images, reflecting a lack of rigorous processing of experimental data.”

There is other circumstantial evidence that something unusual happened at Wuhan University in November 2019.

The preponderance of evidence indicates that the COVID-19 pandemic might have originated in the Wuhan University’s ABSL-3 animal laboratory.  But is it the pandemic perpetrator or the scapegoat for a more nefarious PLA operation?