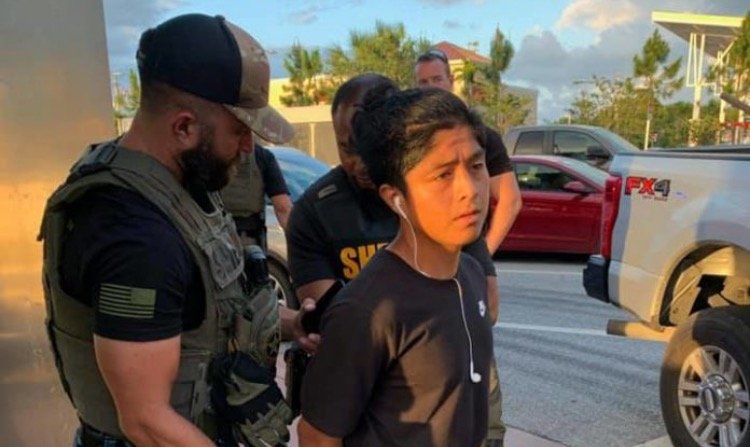 The victim told police that she was awakened in her Hidden Harbor Estates senior community home by a masked intruder around 3 AM last week and then he raped her.

Sheriff Snyder said Mendoza was in the US illegally and had been arrested at least 3 times before.

Mendoza was previously arrested for lewd and lascivious behavior after exposing himself at a park where young children were present.

The 20-year-old immigrant from Guatemala who allegedly sexually assaulted an elderly woman in Stuart last week has prior convictions and was in the country illegally, according to the Martin County Sheriff’s Office.

Prior to this latest arrest, he had been arrested three other times in Martin County, prosecutors say.

As a juvenile, he was charged with grand theft and battery.

As an adult, Mendoza was arrested for exposing himself at a park in Stuart where children were present.

According to the arrest report, a woman called 911 to report a man on a bicycle masturbating in plain view at Shepherds Park. The woman said the man had his genitals out while staring at another woman at the park taking pictures of her dog. Authorities said the park had numerous young children in the area. When she yelled at him to stop, she said he hopped on his bicycle and left the area. A police officer from Stuart spotted a man on a bicycle who matched the description of the individual in the park. The woman who called 911 identified Ailon-Mendoza as the man in the park. Deputies also found marijuana and a pipe in his backpack.

He spent nearly a year in jail for that crime.

“We use the term ‘the immigration system is broken,’” Sheriff Snyder said. “A broken immigration system in furs that there is a system. It does not appear to us and local law-enforcement at least if there’s any system that the federal government has any idea what they are doing.”

Mendoza appeared before a judge last week with an interpreter as he faced charges of sexual battery by great force, burglary of a dwelling with assault or battery while masked, and false imprisonment while masked.

WATCH: The 20-year-old man accused of raping an elderly woman in Martin County appeared in court where the judge set his bond at $520,000. https://t.co/MkDIRd9LAU pic.twitter.com/dWPawpYOv5