HUGE: MORE VIDEO SURFACES of Capitol Police Waving Protesters Inside, Moving Barricades Aside, Standing By as Protesters Walk In 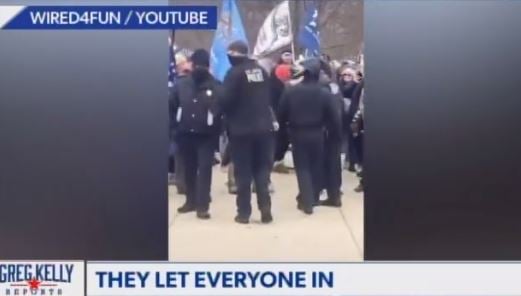 American Greatness published video on Sunday that directly contradicts government prosecutors’s claims filed against at least one protester in the January 6 “riots” at the US Capitol.

The new video reveals that police invited several protesters into the US Capitol that day. Several of these same protesters were later charged by overzealous prosecutors and smeared by the press.

Another video shows a police officer moving fencing and into the US Capitol.

Who the hell was this “cop”?? Why encouraging people through? pic.twitter.com/OcXWCh33P9

Another video shows a Capitol Police officer directing protesters inside the US Capitol to the Senate Chambers.

And Mo Brooks was warned about Antifa attacks the day before Jan. 6 protests and Capitol riot.

1. A Congressman warned me on MONDAY of a growing ANTIFA threat & advised that I sleep in my office rather than leaving Capitol complex & sleeping in my condo. I heeded that advice & have slept on office floor for 4 straight nights.

And the police turned their backs on Antifa.

On Thursday night Greg Kelly released even more video of Capitol Police waving Trump supporters into the US Capitol.
This is outrageous!
The mainstream media and Democrats lied through their teeth about the Jan. 6 protests!