HUGE EXCLUSIVE: US Capitol Doors on Jan. 6 Were Magnetically Locked – Someone Inside Capitol Security Had to Release the Lock to Open the Doors (VIDEO) 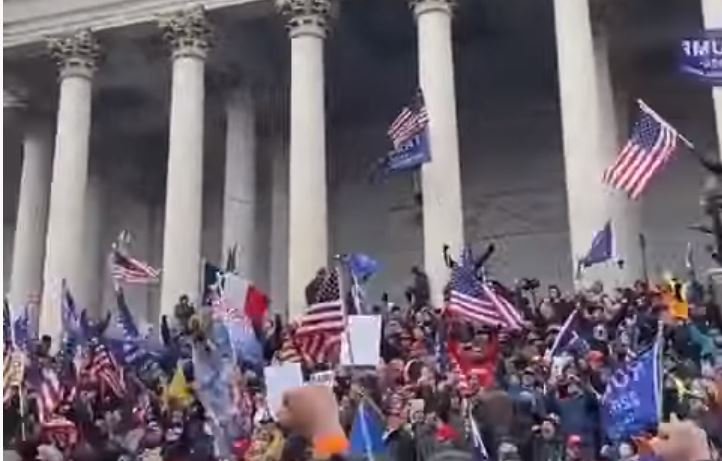 Last week a member of the Oath Keepers called The Gateway Pundit to tell us his story of the January 6th protests and riot. He is living in fear since the Jan. 6 protests at the US Capitol and wanted to get his story out.

The Oath Keepers is a non-partisan association of current and formerly serving military, police, and first responders, who pledge to fulfill the oath all military and police take to “defend the Constitution against all enemies, foreign and domestic.”

What he told us is truly shocking and has not been reported by the mainstream fake-news media.

This man wanted to remain anonymous. We spoke with Attorney Kellye Sorell about his story. He believes the government is planning to arrest him.

On January 6, he told us about the famous, not so famous, so-called “stack video” that was making the rounds in the fake news following the protests.

In the video you can see several Oath Keeper members march up the US Capitol steps, sing the National Anthem while they are facing the massive crowd.

Then this Oath Keeper dropped this bomb–

According to this American patriot, who is a US Marine veteran who worked overseas at a US Embassy, the doors on the US Capitol are electronically controlled magnetic locked doors. And someone inside the security booth at the US Capitol opened the doors!

Here is what we were told.

Jim Hoft: And they were not opened from the outside?

Retired Marine: They were opened from the inside. Now one of the stories I read recently was that some Marine, some Marine Major, went inside and managed to run around and open up the doors. And I think that was on your website, as well. But here’s what I can tell you about magnetic locks. If a door is locked by a mag lock it cannot be opened from the outside or the inside unless the person controlling that door opens that door by turning off the magnetic lock which those doors according to the photos I took are equipped with.

Retired Marine: Now these magnetic locks, I worked in the American embassy overseas. They are very, very strong.

Jim Hoft: I’m sure and they, you would think at the US Capitol they would have top security there.

Retired Marine: Now to give you an idea how strong they are, you could tie a chain to the handlebars of the door and tie it onto a truck. And you can take off with the truck and it is probably going to rip the door handles off but it is not going to open that door. The only way those doors can be opened if they want to be opened is from inside a security booth that is also equipped with a magnetic lock.

Jim Hoft: Has this ever been reported?

Retired Marine: Not that I’ve heard of.

Jim Hoft: Oh my God, this is really big!

Retired Marine: If those magnetic locks had been engaged, in other words, if Capitol Police did not want people opening that door. Now I can understand they might say, “We had police outside so we didn’t want to engage them.” If they did not want those magnetic locks open, there is NOTHING, nothing, no person, no group of people, no hundreds of people who could have opened those doors. No one. Unless the Capitol Police wanted those doors open. As soon as those doors were open, I was lifted off my feet. There was a forward momentum.

The Gateway Pundit altered the voice quality at the request of this witness.