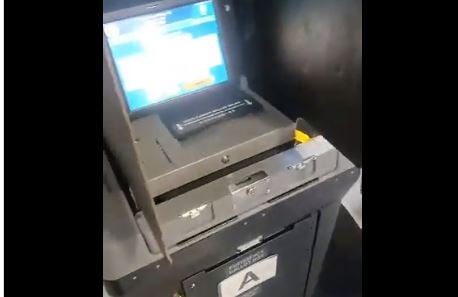 Luzerne County, Pennsylvania Director of Elections pointed to flaws with Dominion Voting Machines for issues in this week’s primary election. Ballots labeled as Democrat were popping up on the screen regardless of the voter’s party registration.

Voters were noticing incorrect labeling on electronic ballots in Luzerne County. Regardless of party, every voter was seeing a ballot labeled as democratic primary on the first screen.

“Unfortunately, this morning, the machines were all shut down and people were losing their patience and leaving,” a voter from Exeter said…

…Officials at several voting locations confirmed ballots labeled as Democrat were popping up on the screen regardless of the voter’s party registration. But workers say when the Republican ballots are printed, they do say Republican on the top.

Luzerne County Director of Elections Bob Morgan says the issue didn’t originate here in northeastern Pennsylvania. He told us several times, it was a problem with coding in the voting machines.

“It took us about probably five weeks. We gave a final product to Dominion. There is no evidence of any of this problem on the mail-in ballots which were produced from that file. We’re still working with Dominion to get an explanation as to how this coding error occurred. They were as surprised about it as we were,” Morgan said.