Lucas Gerhard is a 21-year-old man. Instead of celebrating his graduation from Lake Superior State University in Sault St. Marie, MI, in the criminal justice field and looking for a job in law enforcement, Lucas is locked down in his father’s home, wearing an ankle bracelet. 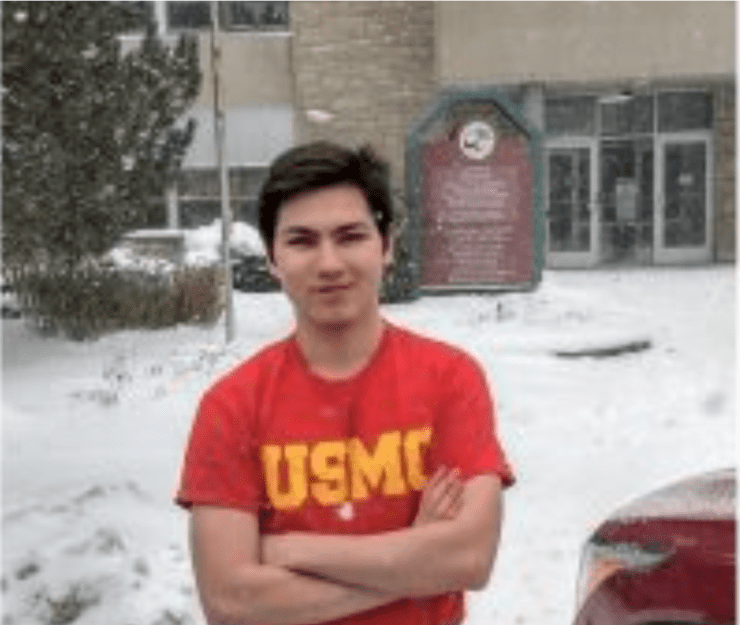 Lucas is an Eagle Scout and has no criminal record. 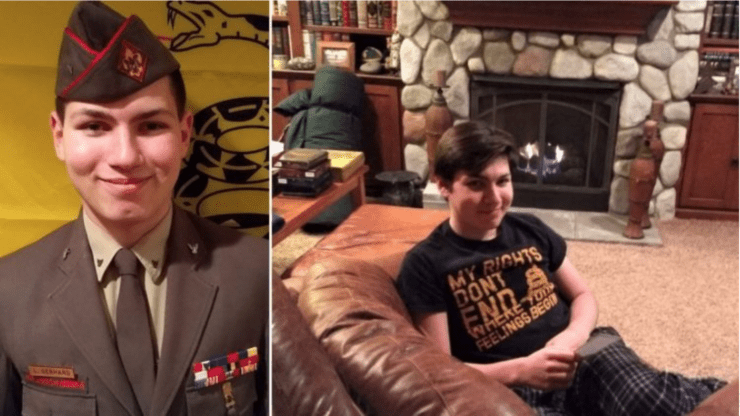 During his trial, the prosecutor attempted to paint Lucas as a threat to the school community, claiming that he had numerous “contacts” with Law Enforcement at LSSU.

Lucas’s father explained: “The so-called ‘contacts’ were made as a result of more anonymous calls to LSSU public safety, and an incident where Lucas’s car was vandalized and his rear window smashed out! Not a single one of those was what can be considered a negative or derogatory incident.  An example of one incident where a call was made was when Lucas was in his OCSO cadet uniform and carrying a bag of police training gear across campus to his communications class where he was giving a speech in law enforcement methods. The call was made as soon as he exited his dorm. The police were apparently told by the caller that they felt threatened by seeing Lucas when they saw him carrying riot gear. Note that LSSU is a school where a large majority of students are Criminal Justice majors! But Sault St. Marie police officers actually responded and pulled Lucas out of the classroom WHILE HE WAS GIVING HIS SPEECH to question him. His professor came out and told the officers that Lucas’s speech was pre-approved as well as the props he brought. The report noted that his explanation was accepted and no further action taken. I might add that every other time something like this happened, the result was the same. No action taken, either from Law Enforcement nor the College. The level of harassment Lucas endured there was astonishing.”

Lucas’s real crime was being an unashamed conservative college student. 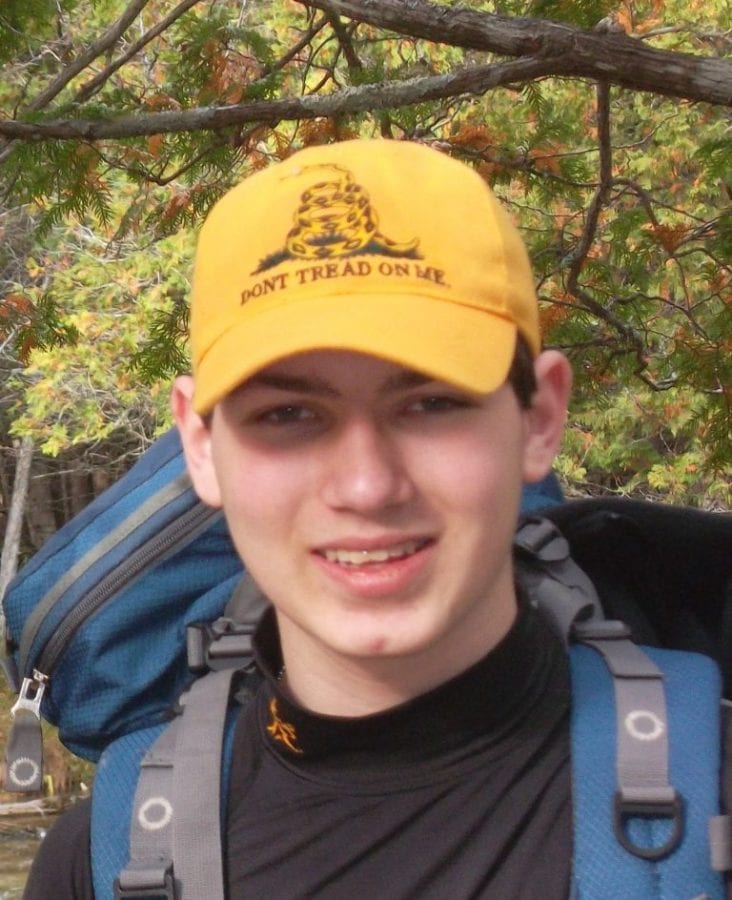 The story we are about to tell you is truly one of the most remarkable cases of injustice you will ever read. It’s a story of how easily two intolerant, liberal students, with the help of the police, school administrators, and an overly zealous prosecutor, can cancel the life of a young man, all while trampling on his First and Second Amendment Rights.

Adam de Angeli was the legislative director for State Representative John Reilly when he got a call from retired Marine Corps Colonel Mark Gerhard, the father of Lucas Gerhard. At the time of his call to his state representative’s office, Gerhard’s 19-year-old son was serving time in jail over a Snap Chat joke he sent to a closed group of friends. According to court documents, two liberal students saw Lucas’s Snap Chat image on a friend’s phone, took a screenshot, and called the police to report him. According to his father, one of the female liberal students who reported his Snap Chat image to local police frequently argued with Lucas over his conservative views, most recently about her belief that Columbus Day should be renamed Indigenous People’s Day. Lucas, who was growing tired of her constant badgering, blocked her on his social media accounts. She took a photo of his Snap Chat to friends with her phone and used it as “evidence” that his private chat to his friends was somehow indicative of a threat.

Lucas’ Snap Chat, with the caption: “Takin this bad boy up. This outta make the snowflakes melt. aye? And I mean snowflakes as in snow,” is seen below. 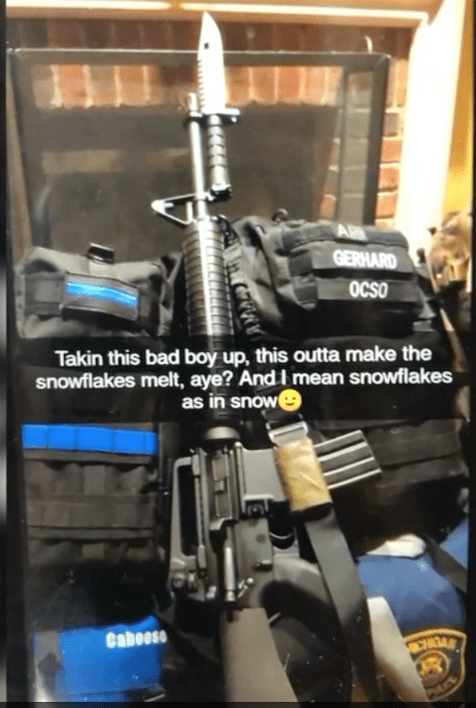 While he was home from school, Lucas saved his money and lawfully purchased an AR-15. When Lucas returned to school at Lake Superior State University on August 23, 2019, he checked his gun and ammunition with the university’s campus safety, as required. Shortly after he arrived at school, Lucas was visited by Sault St. Marie Police officers.

When he was asked about his Snap Chat post, Luke Gerhard explained to the police officer that the term “snowflake” was a reference to liberals whose brains “melt” when faced with something or someone who expresses an opposing political ideology. He told the police officers he had no intention of harming anyone and that it was simply a joke he shared with friends. He was arrested the following day and charged with making a terrorist threat, which carries a maximum sentence of 20 years.

“I was in disbelief. I couldn’t believe the prosecutor had actually decided to press charges,” Retired Col. Mark Gerhard said, explaining that if school officials thought his son was a threat, they would have asked police to speak with him sooner.

From Big League Politics -Despite the judge commenting positively on Gerhard’s demeanor and complimenting the young man for his composure while facing the charges, Gerhard was ultimately kept on a tether because of highly irregular behavior from the prosecution. They inexplicably produced a video of a Mosque shooting in Christchurch, New Zealand from 2019 and played it in the courtroom for several minutes to bias the proceedings.

“As a Marine, I’ve been exposed to some incredibly traumatic events , and even so, it was entirely sickening watching the violent video. It was one of the most horrifying things I’ve ever seen in my life. The point of a tether is to prevent someone from fleeing bond. How the prosecutor was allowed to play this for seven or eight minutes, without any real contextual value linking the reasoning as to why Lucas should remain tethered, was both mystifying and disturbing,” Col. Gerhard said to Big League Politics.

“I feel it was borderline unethical and certainly inappropriate for the prosecutor to introduce something so inflammatory, knowing full well the Judge would not know the basis of how and where it was derived from,” he added.

Lucas spent 83 days in jail before his father was able to bail him out. After he was released from jail he was sentenced to house arrest, where he remains today in his father’s home with a tether at the cost of $500 per month. His father, Col. Mark Gerhard, has been forced to pay for the monthly tether charge as well as his son’s legal defense fees.

As part of his house arrest agreement, Lucas is not allowed to attend school, use the internet or leave his home. His father told us that “COVID lockdowns have been hard enough on kids,” but not being able to use the internet while being locked down in his home has been very difficult. Mark Gerhard says he gives his son a lot of credit, explaining that he is proud of how his son has handled this situation with the utmost courage and character.

Adam de Angeli started a GoFundMe account to help Lucas and his father with their mounting legal fees. “I immediately realized the issue wasn’t the law but its gross misappropriation. I reached out to Mark and, on my own private time, helped him in every way I could, including creating the GoFundMe, which, so far, has raised over $33,000 of the $52,000 goal. I also did everything possible to promote his cause,” de Angeli told us.

Although the mainstream media have almost completely ignored Lucas’ case, Democrat Civil Rights Attorney Jonathan Turley picked up on his case and wrote about it on his website:

A former eagle scout, Gerhard found himself under arrest with a $250,000 bond and a 20-year potential sentence. He also has Type 1 Diabetes, requiring glucose levels monitored as well as prescription insulin.

I fail to see the basis for the criminal charge or how any prosecutor could have signed off on the charges. The current provision states

“Sec. 543m. (1) A person is guilty of making a terrorist threat or of making a false report of terrorism if the person does either of the following:
(a) Threatens to commit an act of terrorism and communicates the threat to any other person.
(b) Knowingly makes a false report of an act of terrorism and communicates the false report to any other
person, knowing the report is false.
(2) It is not a defense to a prosecution under this section that the defendant did not have the intent or
capability of committing the act of terrorism.
(3) A person who violates this section is guilty of a felony punishable by imprisonment for not more than 20 years or a fine of not more than $20,000.00, or both.”

According to Adam de Angeli, after his phone conversation with Col. Gerhard, Rep. John Reilly agreed to help with legislation to clarify Michigan’s law against terrorist threats. Reilly proposed the following change to the bill.

The greatest problem however is a complete breakdown of discretionary authority by police and prosecutors. Everyone seems to have failed at every stage in recognizing that this was not a criminal case. Notably, it does not appear that the school itself concluded that Gerhard was a threat. More importantly, nothing in the posting clearly states a threat.

Rep. Reilly’s proposal did not pass, but he is considering reintroducing his proposal to change the wording.

Mark Gerhard, and Adam de Angeli, who has been very vocal about this horrible case of injustice, joined Jim Hoft of the Gateway Pundit and Patty McMurray of 100 Percent Fed Up to discuss the current state of the case.

The court date is scheduled for sometime in June.

100 Percent Fed Up and the Gateway Pundit will keep Americans updated on this incredible case of injustice.