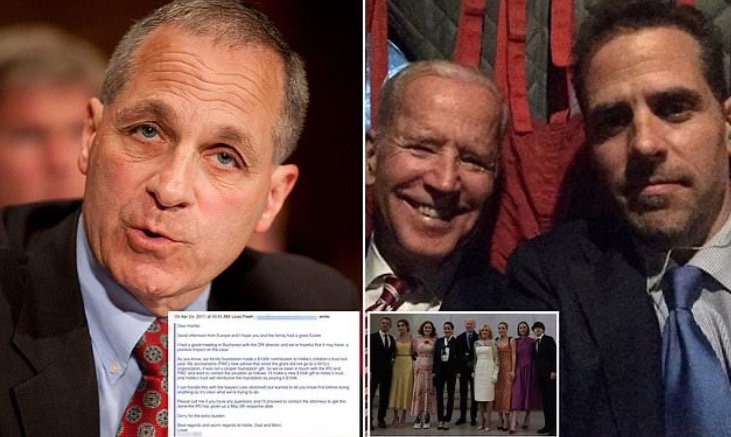 Louis Freeh also spoke with then-VP Joe Biden in 2016 to “explore with him some future work options” that included Hunter Biden.

Freeh, who served as FBI Director under Bill Clinton and George Bush, ran a consulting firm with very corrupt clients who ended up being charged with crimes.

According to the Daily Mail, Freeh’s clients included the “now-jailed Malaysian prime minister who stole billions of dollars from his country and a Romanian real estate tycoon convicted of bribery.”

Via The Daily Mail:

Freeh brought up the idea again a month later – and mentioned that he was working for the then-Malaysian prime minister Najib Razak, who was in the midst of a scandal over one of the world’s biggest financial frauds, and was later sentenced to 12 years in prison in 2020.

‘I would like to talk with you and Dad about working together next year,’ Freeh wrote to Hunter.

‘No doubt both he and you have many options and probably some which are more attractive than my small shop.

‘As you know, we have both a law firm and ‘solutions/investigations’ group with a very good brand, DC and DEL (and NYC) offices, and a profitable and interesting global practice (eg., I’m currently representing the Malaysian PM and his family).

‘So if it’s something which interests you both, let’s talk about it at some point. I’m very flexible and we could set it up as an equity-share or whatever works best. It would certainly be an honor to work with you both.’

The emails, obtained by DailyMail.com from Hunter Biden’s abandoned laptop, show that around the same time Freeh was making overtures to the Bidens for business deals, he also gave $100,000 to a trust for Joe Biden’s grandchildren.

The ‘donation’ was made to a trust for the children of Hallie Biden, the widow of Joe’s late son Beau who later became Hunter’s lover.

In July that year, in an email marked ‘confidential and privileged’, Freeh wrote to Hunter that he ‘would be delighted to do future work with you.’

‘I also spoke to Dad a few weeks ago and would like to explore with him some future work options,’ Freeh said. ‘I believe that working together on these (and other legal) matters would be of value, fun and rewarding.’

The donation was not made to a charity. It was made to a private trust.

“As you know, our family foundation made a $100,000 contribution to Hallie’s children’s trust last year. My accountants (PWC) now advise that since the grant did not go to a 501(c) organization, it was not a proper foundation gift.,” Freeh wrote in an April 2017 email to Hunter Biden. “So we’ve been in touch with the IRS and PWC (PricewaterhouseCoopers) and want to correct the situation as follows: I’ll make a new $100K gift to Haley’s trust and Hallie’s trust will reimburse the foundation by paying it $100K.” 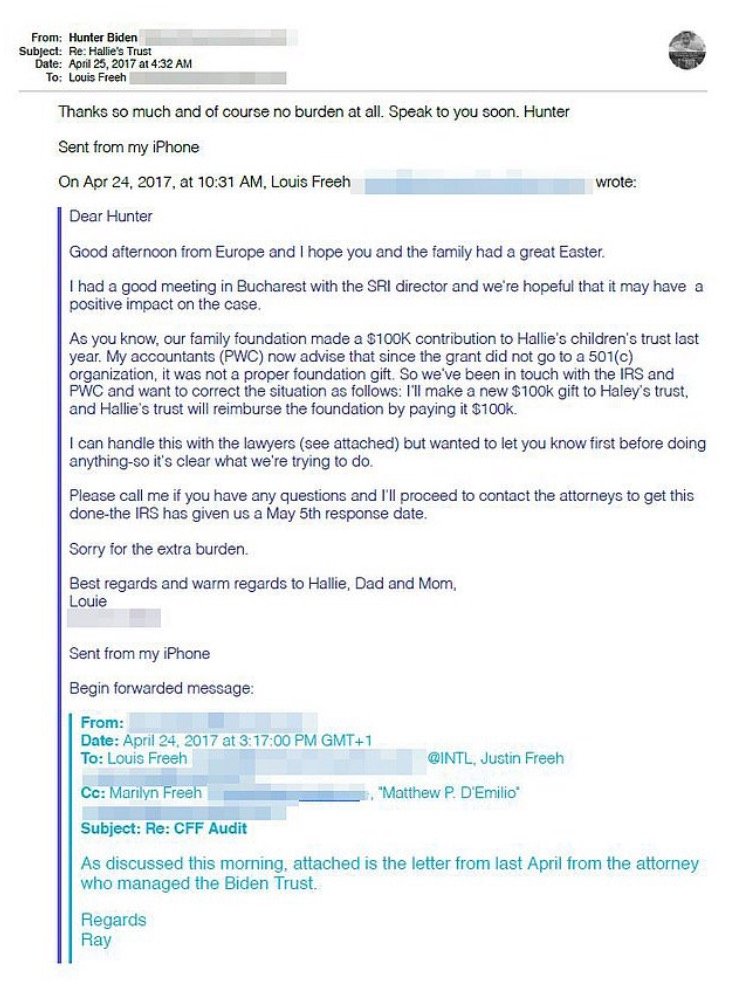 Read the full report from The Daily Mail here.

And the FBI is targeting Rudy Giuliani?