FILTHY LIES: After Trump’s Historic Peace Deals Between Israel and Several Arab States – Biden Admin Lies and Says, “We Don’t Believe They Did Anything Con 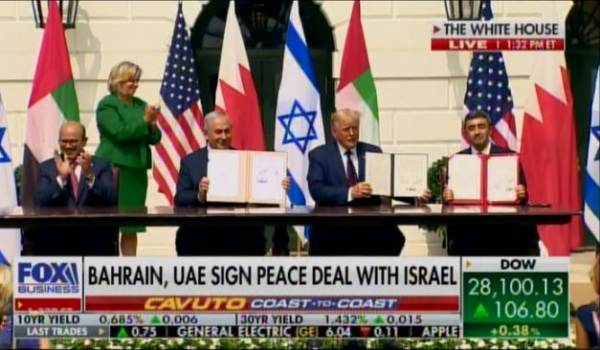 President Trump signed the historic Abraham Accords peace agreements between Israel, Bahrain, and the UAE in September 2020 at a White House ceremony.

Then, back in October 2020, President Trump announced that Israel and Sudan had agreed to a normalization of relations.
Sudan was the third Muslim country in 3 months to announce a peace agreement with Israel, thanks to the work of the Trump administration!

#BREAKING: President @realDonaldTrump has announced that Sudan and Israel have agreed to the normalization of relations— another major step toward building peace in the Middle East with another nation joining the Abraham Accords 🇸🇩 🇮🇱 🇺🇸

This was the third peace deal with Israel and the fourth peace deal for the Trump administration.
President Trump announced a historic peace agreement between Kosovo and Serbia earlier this year.

Moments after Trump formally moved to remove Sudan from a US list of state sponsors of terrorism, reporters were escorted to the Oval Office where he was on the phone with leaders of Israel and Sudan.

“Sudan and Israel have agreed to the normalization of relations — another major step toward building peace in the Middle East with another nation joining the Abraham Accords” that involve Bahrain and the United Arab Emirates, Trump aide Judd Deere wrote on Twitter.

This morning Biden spokeswoman blatantly and willfully lied to the entire nation saying President Trump, “Did not do ‘anything constructive really’ to bring an end to the long term conflict in the Middle East.”

Jen Psaki defending Biden
“tactical approach” to Israel: “Sometimes diplomacy needs to happen behind the scenes, it needs to be quiet.”

More Psaki on Trump administration: “We don’t think they did anything constructive really to bring an end to the long term conflict in the Middle East.”

Here is the audio of Jen Psaki lying through her teeth and the mainstream media acting as willing co-accomplices to the lies.

After Trump secured historic Middle East peace deals, Psaki says Biden is “not following the same tactics.” She also reminds us that Biden reinstated aid to the Palestinians that’s being used to fund terror attacks on Israel. pic.twitter.com/D8HjD39p7w