EXCLUSIVE: “It Was A Farce”, Interview With GA Recount Eyewitness Who Wants a Real Hand Audit

The people of Georgia are not happy about the lack of transparency in the 2020 Presidential election or with the Nov. 27th recount in Georgia, and they want a hand audit that is more than just counting papers. The people of Georgia are demanding more transparency. The proof of this claim is readily available.  GWP brings you another story of election irregularities from an eyewitness.

A woman, who has to remain anonymous to readers due to cancel culture,  provided me with official GOP and state of Georgia documents proving she witnessed the recount of ballots in Dekalb, Georgia as a volunteer with the Georgia GOP. 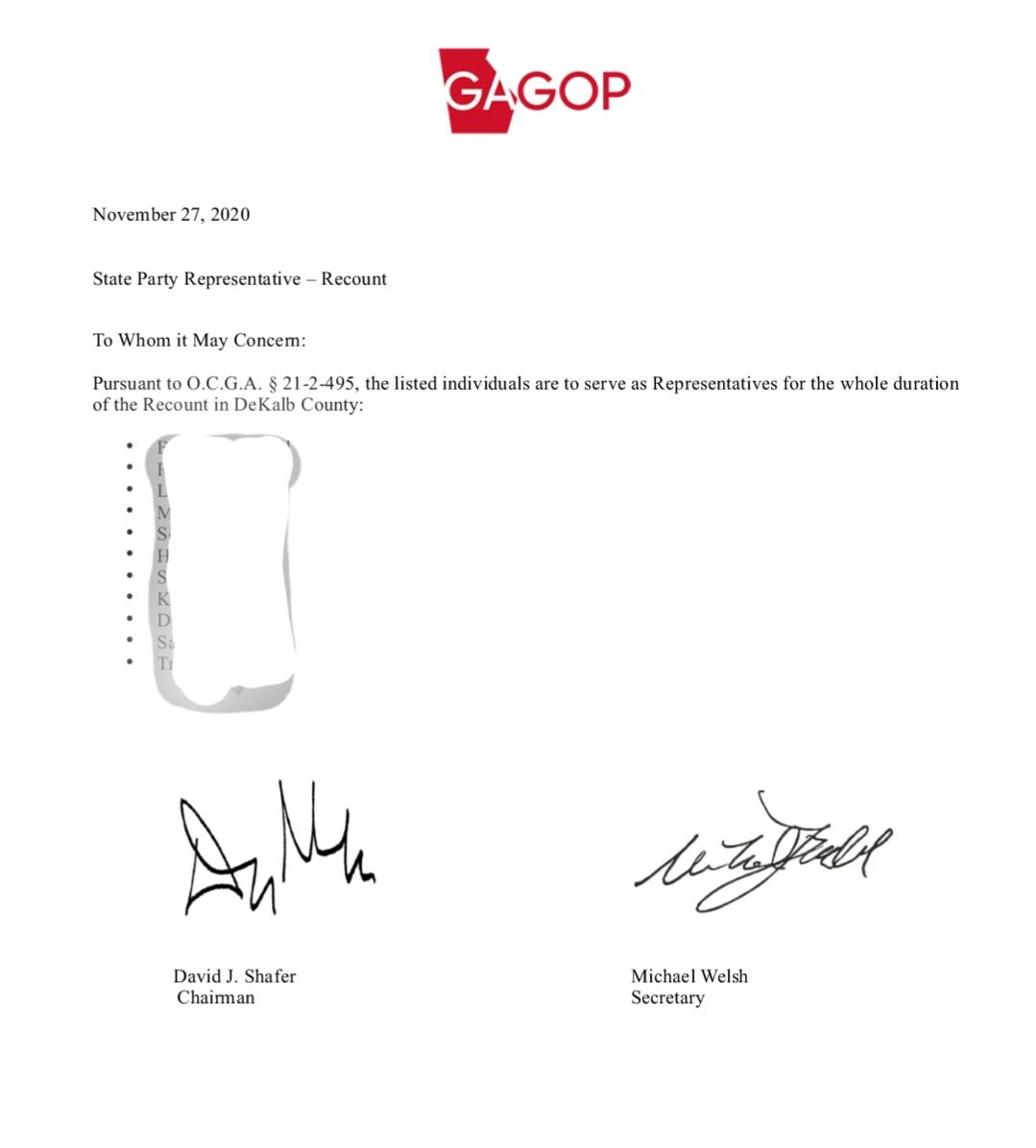 She was sent the following validation of the recount process, which she says the election workers did not abide by, treating her and other workers as an annoyance.  Even though she was allowed to be there by law, validated by the party to be on the scene, she said the election workers were hostile and refused to allow the watchers to be involved, keeping them 8 feet or more away from the ballot counting.

“During the recount of the 2020 Presidential Election workers were just counting the numbers of ballots, the pieces of paper,  and I think they were counting stacks of papers more than once. We were told we were not allowed to get close enough to see details of what they were doing,” the eyewitness said. “Me and two other ladies kept getting pushed back and they both had the same reaction I had about it, like we were just wasting our time.”

“I am convinced something is very strong with the election, I want some answers,” she told me. “I am not a Republican, but I volunteered with the GOP because I was so mad about the election and I wanted to do something,” she said.

The following is a complete and unedited statement from her about her experience:

” I have never been involved in politics or a “member” of any other party organization before. When I saw the Nov 3rd election go awry in the early morning hours, alarm bells were ringing loudly. The media is so dishonest that I didn’t know what to believe, but I wanted to get involved. I didn’t know how so like most I watched the chaos and sat by. Then when I heard about the recount I figured there must be a way to get involved. I Googled GA GOP recount and found a website to volunteer. I live in a very small town so I knew whatever recount happened here would just be silly.

So, I decided to volunteer where potential issues may be found, and I asked for the Atlanta area and was assigned to Dekalb County. It is approximately 2.5-3 hours from me depending on traffic.
I took the day off November 27th and without telling anyone, even my family I headed up for the recount.

I arrived when I was told to. I had to leave all my belongings in my car, even my cell phone. When I went inside they checked my temperature and I had to wear a mask. We had been given letters of approval from the SOS office that I presented to a lady at the check-in table. I received a name tag that each time I left the building had to be returned and then picked back up.
It was a huge building like an empty department store. There was a visitor viewing area roped off with tape. I was allowed inside the recount area where there were about 15-20 tables set up. 3-4 people at each table with a computer and a scanner.

One table had multiple monitors which looked like video surveillance.  As I started to wander around and observe, any time I got within 6-8 feet of a table I was told to back up. At that distance, no ballots could be looked at and it was impossible to see what the computers were displaying before during, and after each scanned batch.
We had been told absentee should be completed prior to other ballots but only one table was doing absentee the others were doing computer-generated ballots. They were a different size. I think I didn’t push the boundaries because of the virus, not that I was worried but some people at that time were weird about it. I should have been more aggressive, I regret that.

3 things that really annoyed me were 1. I absolutely was not allowed close enough to even figure out what they were doing for myself without being told to back up. 2. the workers were within a 2-foot distance of each other so I knew my imposed distance was not related to the pandemic. 3. All of the poll workers at the tables at one time or another had their phones out using them right by the ballots and I was unable to document it because my phone was in the car.
I spoke to others who had been monitors that day and the day before and they expressed the same frustrations. None of us felt like our presence was needed or worthwhile because really we were useless. In my opinion, it was a time-wasting sham and I felt like Raffensberger and crew knew that. It was so obvious that the whole thing was just for show.

Nothing would be accomplished counting paper but they would tell everyone that they had done two recounts so there was no way there was a fraud. And so they did. It really was a joke. It’s why people like me do not usually get involved, I mean we can’t make a difference so why bother.
As our country literally goes to shit we sit by and let it happen. I have friends who never see the news and they are happy in their ignorance.  I want to scream and make a change but have no idea how. I think conservatives are too polite and it is time we got loud and let everyone know that they have been lied to and things are really bad. But what difference does it make? I think we have to reach out and white people need to connect with our neighbors of color and vice versa to let the world know we are NOT divided. We are all equal and the swamp is wrong.

I think, from what I hear in GA that it wouldn’t hurt to have a hand audit. There are so many questions that I think voters would feel better to know once and for all if the vote was rigged. We hear that counties do not have a chain of custody for drop-off ballots and we all saw them stop counting in the middle of the vote count. It’s that nagging thought that it might be a problem.

When Kemp did not call a special session on the original vote, me and many others felt like we weren’t being heard. I think an audit would lead to more voter participation in the next election.

I am not a conspiracy theorist at all but I am intelligent and I know that the election was tampered with I’m just not sure how.