Pei-Yong Shi was trained in the People’s Republic of China and is now a Professor in the Department of Biochemistry & Molecular Biology at the University of Texas Medical Branch (UTMB) in Galveston.

Since 2007, Pei-Yong Shi has also been an Honorary Professor at the Wuhan Institute of Virology and he has been funded by Dr. Anthony Fauci’s National Institute of Allergy and Infectious Diseases (NIAID) since 2004.

Pei-Yong Shi also has extensive research collaboration with scientists from the Chinese People’s Liberation Army, as documented in The Gateway Pundit here, here and here.

That research has led to Chinese patents assigned to Pei-Yong Shi and the Chinese People’s Liberation Army, in particular, to Cheng Feng Qin. 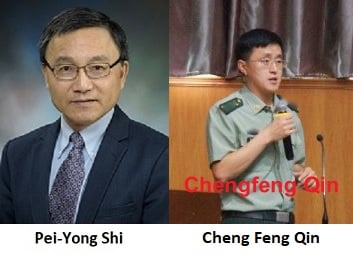 Strangely, the recipient of NIAID grant AI127744, Tian Wang, does not appear as an author on the Chinese military-dominated article that, nevertheless, cites it as a funding source. So, some type of fund shifting may have occurred.

The final oddity is the August 20, 2015 U.S. patent for “Novel Attenuated Dengue Virus Strains for vaccine application” submitted by Pei-Yong Shi and Cheng Feng Qin, one of the patent holders being the Chinese military’s Beijing Institute of Microbiology and Epidemiology

In that U.S. patent application, Cheng Feng Qin hides his affiliation with the People’s Liberation Army, listing Singapore as his work location.

There are no scientific references in the U.S. patent application and it is unclear from where the financial support came.