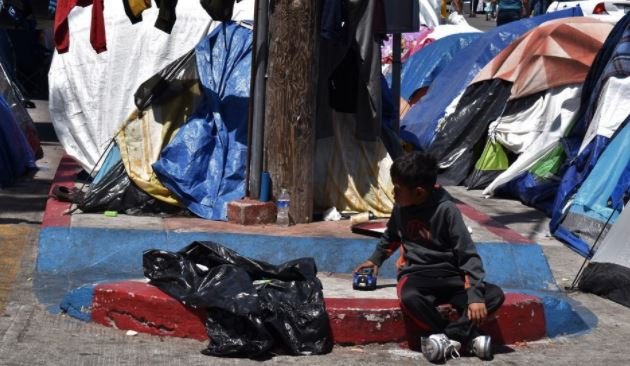 There is currently an active Chicke Pox outbreak at a fake refugee holding center in Tijuana, Mexico.
Several children have the virus and several hundred more are vulnerable to the disease.

The “El Imparcial” website in Tijuana reports that authorities there are dealing with a Chicken Pox outbreak in the El Chaparral refugee camp at the border crossing and in refugee shelters. The shelter run by the Embajadores de Jesus (Ambassadors of Jesus) houses “lateral” deportees flown in from Texas. Carmen Serdan is the shelter built as part of the Return-to-Mexico program, which has been re-purposed since the program ended.

They are supposed to move the people in this camp into the shelters by July 15. Many do not want to move, because the shelters have rules against drinking, drugs, violence and prostitution. The camp is only a couple hundred yards from the border via the Mexican vehicle crossing. If hundreds of them decide to march en masse across the border into the US, there is probably nothing much that can stop them. This situation may come to a head in the next 10 days.

In seven days they will be finished with a chickenpox outbreak in El Chaparral and migrant shelters
(The State Secretary of Health carried out a vaccination session against chickenpox for children under 12 years of age and pregnant women in migrant shelters.)

Tijuana, BC.-In seven days the chickenpox outbreak that occurred among the migrants from El Chaparral and in the “Embajadores de Jesús” and “Centro Integrador del Migrante Carmen Serdán” shelters will be eradicated.

Elon Says He Wanted To “Punch Kanye” After Posting Swastika

Elon Says He Wanted To “Punch Kanye” After Posting Swastika

“Madam Speaker, the American People Have Spoken – They Fired You” – US House Representative Lauren Boebert to Corrupt Nancy Pelosi’s Face