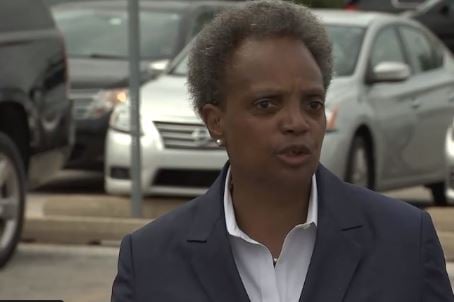 Chicago’s largest police union has issued a vote of no confidence in Mayor Lori Lightfoot amid calls for her resignation over her overt racism against white people.

Fraternal Order of Police Lodge 7 President John Catanzara said in an announcement on YouTube that the union’s members voted unanimously for the no confidence vote in the mayor, as well as Police Superintendent David Brown and First Deputy Superintendent Eric Carter.

“There was a motion from the floor and a second from the floor with the unanimous vote with zero dissent for a no confidence vote against the mayor, the superintendent, and the first deputy. The basis for this no-confidence vote is pretty simple. It’s two-fold. It’s a lack of respect for the Gold Star families and the cancellation of the St. Jude parade, not only to Gold Star families but our members who look forward to remembering the fallen every year,” Catanzara said.

Catanzara added that “the second part of the no confidence vote was the working conditions for our officers for the better part of a year now, and the lack of consideration for family life, social life, whatever the case may be. Too many of our officers have worked extended hours not voluntarily but forced, and the compensation, for starters, is the same whether you volunteer or not. That makes absolutely no sense, but the department doesn’t give a damn.”

“The cancellation of days off and 12-hour shifts, yet again, for no reason, it is pretty close to a contract violation which says it has to be an emergency. There is no emergency,” Catanzara continued. “The superintendent was very clear with me on the phone that the reason this was being done was because of the anniversary of George Floyd’s death and the fear that something might happen. That’s not justifiable.”

According to the New York Post, Mayor Lightfoot responded by saying that getting a no confidence vote from Catanzara is a “badge of honor.”

Lightfoot has been under fire this week for announcing that she will only be doing interviews with black and brown reporters for her second anniversary of taking office.

Even former Democrat Rep. Tulsi Gabbard has called for Lightfoot’s resignation over her glaring racism against white people.