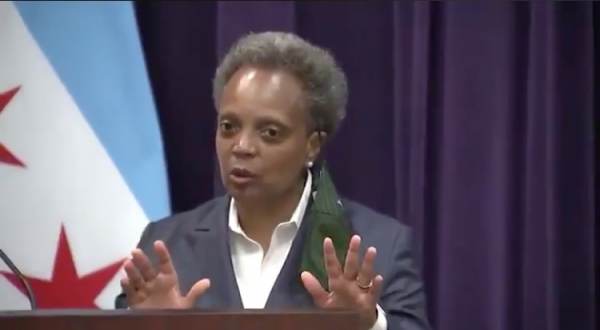 Chicago Mayor Lori Lightfoot is facing backlash after announcing an anti-white racist plan to only allow “black and brown” reporters to interview her about her two year anniversary in office.

At least one Latino reporter who was granted an interview has cancelled in protest.

Lightfoot’s plan was made public on Tuesday after Mary Ann Ahern of NBC News tweeted it out.

As ⁦@chicagosmayor⁩ reaches her two year midway point as mayor, her spokeswoman says Lightfoot is granting 1 on 1 interviews – only to Black or Brown journalists pic.twitter.com/PAUsacD9Gj

The controversial Democrat received so much backlash over her racism that she posted a thread the following day attempting to justify her actions.

This is an imbalance that needs to change. Chicago is a world-class city. Our local media should reflect the multiple cultures that comprise it.

People were still not happy with the excuses for her racism, however.

Latino Chicago Tribune reporter Gregory Pratt tweeted that he had been granted an interview with the mayor — but canceled.

“However, I asked the mayor’s office to lift its condition on others and when they said no, we respectfully canceled. Politicians don’t get to choose who covers them,” Pratt wrote.

I am a Latino reporter @chicagotribune whose interview request was granted for today. However, I asked the mayor’s office to lift its condition on others and when they said no, we respectfully canceled. Politicians don’t get to choose who covers them. https://t.co/YMW8M8ZgJm