BUSTED: AP Knew Hamas Was Operating in Their Building in Gaza Back in 2014 Despite Their Bogus Report from Saturday 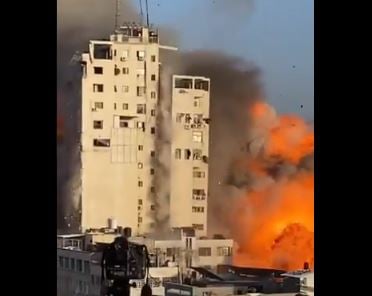 Hamas has fired 2,300 rockets into Israel, targeting Israeli population centers, over the past week.

Hamas and Islamic Jihad continue to fire rockets from Gaza toward Israeli civilians.

We will continue defending Israel. pic.twitter.com/SjUpmauay1

On Saturday Isreali Defense Forces retaliated with an airstrike that destroyed a high-rise building housing the offices of Associated Press (AP) and Al-Jazeera, a Qatar state media outlet that spreads anti-Semitic and anti-Israel propaganda.

Isreal notified the building residents before the bombing.

Video shows the moment an Israeli airstrike hit and leveled the 14-story Al-Shorouk Tower in Gaza amid an escalating conflict between Israel and Hamas. https://t.co/Zwdwp29nE2 pic.twitter.com/O3xPEoCR20

The Associated Press on Saturday claimed they had no idea that Hamas operated in the tower.

The AP has operated from the building for 15 years, including through three previous wars between Israel and Hamas, without being targeted directly. During those conflicts as well as the current one, the news agency’s cameras from its top floor office and roof terrace offered 24-hour live shots as militants’ rockets arched toward Israel and Israeli airstrikes hammered the city and its surroundings.

“We have had no indication Hamas was in the building or active in the building,” AP President and CEO Gary Pruitt said in a statement. “This is something we actively check to the best of our ability. We would never knowingly put our journalists at risk.”

But this appears to be a blatant lie.

A former AP reporter wrote about Hamas operations and rocket launches “right beside their office” back in 2014.

The AP forgot to mention this in their report on Saturday.

“Despite giving forewarning, AP reacted with righteous indignation, expressing ‘shock’ and ‘horror’ that ‘the Israeli military would target and destroy the building housing AP’s bureau and other news organizations in Gaza,’” posted David Lange, operator of the popular Israellycool site.

“I believe they are lying and absolutely knew Hamas was in the building,” added Lange, citing comments from the building’s owner immediately before the attack and remarks from former AP reporter Matti Friedman who blew the whistle on the agency’s refusal to tell the truth about Hamas in 2014.

In support, Lange quoted Friedman’s 2014 comments: “The AP staff in Gaza City would witness a rocket launch right beside their office, endangering reporters and other civilians nearby—and the AP wouldn’t report it, not even in AP articles about Israeli claims that Hamas was launching rockets from residential areas.”

Friedman continued, “Hamas fighters would burst into the AP’s Gaza bureau and threaten the staff—and the AP wouldn’t report it. . . Cameramen waiting outside Shifa Hospital in Gaza City would film the arrival of civilian casualties and then, at a signal from an official, turn off their cameras when wounded and dead fighters came in, helping Hamas maintain the illusion that only civilians were dying. (This too happened; the information comes from multiple sources with firsthand knowledge of these incidents.)”