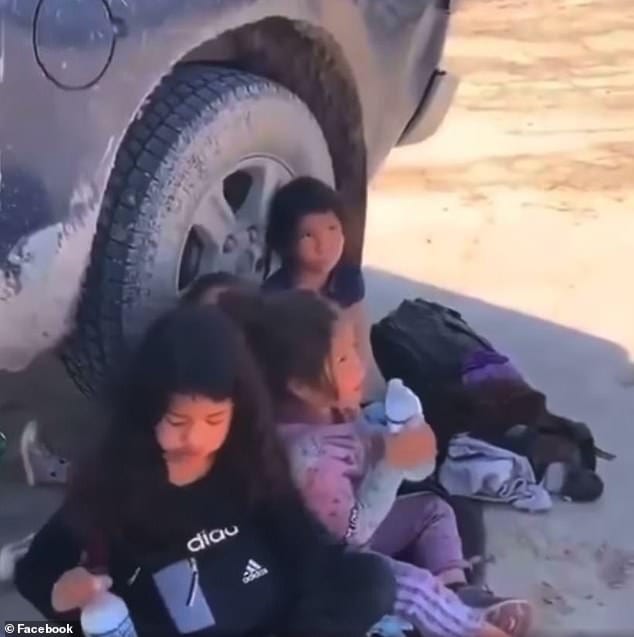 Since Joe Biden’s inauguration, over 19,000 unaccompanied children have entered the U.S. along the southern border, an all-time monthly high that has forced the Biden administration to house migrant teenagers in convention centers, camps for oil workers, and a military base.

100 Percent Fed Up reports- Is this the “compassionate” party we heard so much about when basement Joe was running for office against President Trump, who did more to stop the flow of human trafficking into America than any US President in modern history?

Where’s Kamala? Didn’t Basement Joe tell us she would be handling the border crisis?

On April 3, an off-duty US border agent was driving on a remote road in Texas when he noticed a little boy walking by the side of the road by himself. The border agent, who was curious about the boy, pulled over to inquire about what he was doing by himself. When he pulled over, the young boy immediately approached his vehicle and asked for help began sobbing and begging for help.

When the border agent asks the boy what happened and if he was traveling with his parents, the sobbing boy tells him that he was not with his parents, but instead, he was left by a group of people to fend for himself. The border agent asked, “You do not know where they are at? They left you alone?’ The frightened boy explained, “At the end, they abandoned me. I have come here to ask you for help.”

Now, in Kamala’s cruel new America, which encourages criminals to use children as pawns as a means to freely enter the United States, five young girls have been found lying on the ground on a Texas farmer’s ranch…one of them was naked and crawling.

The Daily Mail – On Sunday, a Texas farmer found 5 abandoned girls from Honduras and Guatemala on his land, hungry and crying after being left by their families to try to get into the country alone in another example of the worsening border crisis.

All of the girls were under the age of seven, and one was so young she was crawling. There was also a two-year-old in the group. Jimmy Hobbs, the 75-year-old farmer, and his wife Katie gave an interview to Texas Congressman Tony Gonzales, which was posted on Twitter after the pair submitted photos and videos to social media groups that campaign for tighter border control. Jimmy and Katie Hobbs. Jimmy, 75, has lived on the farm his entire life. He said the situation is the worst he’s ever seen it and that thousands of kids will likely die this summer trying to enter the US illegally in the sweltering heat, with no food or water.

Gonzalez also shared a gut-wrenching image of the girls lying in the dirt. In one of the videos she shared, Katie fumed in the background: ‘These children dumped out on the side of the river here on our farm.

‘If this doesn’t make you mad and make you want to take to the streets, I don’t know what will. They have no mother, no father, no nothing. This is one of our workers’ wives right here taking care of this tiny one. No one with these children.’

Hobbs is an onion and watermelon farmer who has lived on the land he owns his entire life. The farm is in Quemado, Texas, which sits on the border with the Mexican state of Coahuila.

He said that he believes the girls would have died if he hadn’t found them and that the situation at the border is the worst it has been in the 75 years he has lived on the farm. The youngest of the girls is so little she can’t walk yet. She was naked when the farmer arrived, and the girls didn’t have any diapers for her either. She is shown being cradled by one of the farm workers’ wives.

He and his wife warned that there will be ‘thousands more’ who get into perilous danger and die this summer trying to illegally cross the border as temperatures rise and President Biden continues to shrug off the crisis.

Last night I shared a heartbreaking photo of young children found by a farmer on his land in Quemado. While we thank God they were found alive, these tragic scenes are happening more & more.

Today I visited with him & talked about the border crisis. We need a solution now. pic.twitter.com/Zzvk4UgAGc

The farmer added a plea to President Biden – tighten the rules to prevent people from flooding the border or come and see the crisis for yourself.

‘We’re talking about how the United States is a humane country – this is not humane anymore, and it all started under .