Biden’s Summer Camp for Migrant Kids: Plans for 10,000 Children in Massive Tent City at Fort Bliss, Texas – Up from 4,500 Currently Warehoused There in Filthy Conditions

Joe Biden is planning on warehousing up to ten thousand migrant children in a massive tent city at Fort Bliss, Texas this summer, more than doubling the 4,500 migrant kids currently being held in warehouse conditions there. Advocates report the children now at Fort Bliss are stuck wearing dirty clothes and sleep on rickety cots with unwashed sheets in tents that hold 900 children each and “smell like a high school locker room.” The Biden administration has been bragging to reporters how they successfully moved migrant children out of crowded, disease spreading Border Patrol facilities. What they haven’t said is that the kids are now housed in crowded, disease spreading tent encampments at Fort Bliss. 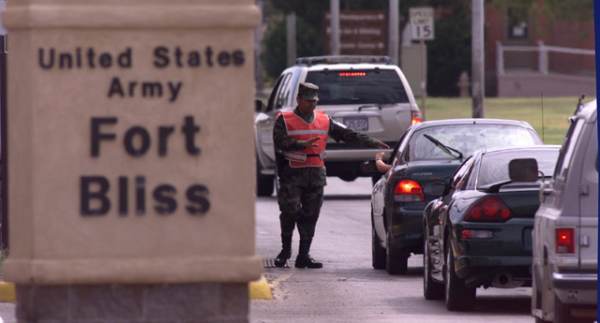 Biden’s abrupt reversal last January of President Trump’s border policy blocking illegal alien migrant children from remaining in the United States due to the pandemic has caused a surge of tens of thousands of children to be smuggled by human traffickers across the border with Mexico. The Biden administration is acting as a de facto partner with the cartels by accepting and relocating the children within the U.S. Videos taken on the Texas side of the Rio Grande show law enforcement officials taking in migrants personally delivered by smugglers who then return to Mexico without being arrested to do it again and again.

A coyote brazenly walks illegal Venezuelan migrants across the Rio Grande, right in front of ⁦@CBP⁩ officers. The migrants were directed to processing. The coyote strolled back across the river to get more migrants. pic.twitter.com/0ybRYtGGTw

Wrapped up a week on the northern bank of the Rio Grande in Del Rio, Texas, documenting mostly Venezuelan migrants arriving at the U.S. border for @reuterspictures #Borderlands #Texas #migrants #Venezuela pic.twitter.com/kft8XMqQQM

The plans to expand the tent city at Fort Bliss were reported by the New York Times and CBS News. The news outlets also reported on the warehouse conditions at Fort Bliss, with one advocated quoted as saying this is worse than conditions under their hated President Trump.

In a federal shelter in Dallas, migrant children sleep in a windowless convention center room under fluorescent lights that never go dark.

At a military base in El Paso, teenagers pile onto bunk cots, and some say they have gone days without bathing.

And in Erie, Pa., problems began emerging within days of the shelter’s creation: “Fire safety system is a big concern,” an internal report noted. Some of the hot water heaters were not working, and lice was “a big issue and seems to be increasing.”

…“I know the administration wants to take a victory lap for moving children out of Border Patrol stations — and they deserve credit for doing that,” said Leecia Welch, a lawyer and the senior director of the legal advocacy and child welfare practice at the National Center for Youth Law, a nonprofit law firm focused on low-income children. “But the truth is, thousands of traumatized children are still lingering in massive detention sites on military bases or convention centers, and many have been relegated to unsafe and unsanitary conditions.”

…“No foster care system in America would allow kids to remain in these sorts of places for weeks or months,” said Ms. Welch, who has been visiting shelters and interviewing children about their stays.

None of the shelters are open to the public, and Ms. Welch said she and members of her team were not permitted to take photographs there. Her organization monitors the government’s adherence to a 1997 settlement (the Flores case) that set conditions for how immigrant children are detained in the United States. Many groups working with the federal government to provide care are not allowed to talk about what they see.

“I am flabbergasted to learn that Fort Bliss will increase capacity to 10,000 beds,” said Ellen Beattie, a director at the International Rescue Committee. She added that it was “hard to imagine this being in the best interest of the children there.”

Living conditions at the Fort Bliss shelter, which is made of soft-sided tents, are less than desirable. Ms. Welch, who visited late last month, said it smelled like a high school locker room. She spoke to children who had not received clean clothes in days.

Ms. Welch described precarious “bunk cots” for children to sleep in that can collapse when they are playing. The linens did not appear to be laundered regularly, she said.

While there is an option to play soccer outside in the Texas heat, some of the children told her they did not want to because they did not know when they would receive clean clothes.

The children “generally describe not feeling cared for and a sense of desperation,” Ms. Welch said.

The Trump administration was widely criticized for the tent city it opened in Tornillo, Texas, on desert land outside El Paso that held more than 2,800 children and teenagers in 2019. “But Fort Bliss is much worse in every respect,” Ms. Welch said, adding, “It goes against everything we know about the proper care and treatment of traumatized children.”

Migrant children housed at two makeshift U.S. government shelters, an Army base in west Texas and a Houston warehouse that has been shuttered, described subpar living conditions, including limited access to showers, soiled clothes and undercooked food, attorneys who interviewed them told CBS News.

Unaccompanied children housed at the two Department of Health and Human Services (HHS) emergency housing facilities — which are not licensed to care for minors — also reported feeling sad and desperate while in U.S. government custody, attorney Leecia Welch said, citing recent interviews with more than 30 migrant girls and boys.

Several migrant children reported suicidal thoughts and talk of self-harm among other youths, Welch said, detailing “serious mental health deterioration” among some of the minors she interviewed. The minors longed to be with their families, Welch added, but some had not spoken to case managers charged with facilitating their reunifications.

As of late last week, more than 13,000 of the 20,000 migrant children in HHS care were being housed in the 13 emergency facilities the department has set up in military bases, convention centers, camps for oil workers and other sites, according to internal government documents obtained by CBS News.

…Welch and her colleagues interviewed more than a dozen girls and boys held at Fort Bliss, a U.S. Army base that is currently housing more than 4,000 migrant children in HHS custody. The site includes multiple white tents that each house about 900 children, who sleep on bunk cots.

“You’d walk into the tent and it’s just rows and rows of these little flimsy bunk cots as far as the eye can see,” Welch said.

Welch said she detected a foul odor inside the tents, likening them to a boys locker room. Several children reported not having their clothes washed consistently, she added, noting that one girl said she had not worn clean clothes in more than a week.

There was no formal education for the children housed at Fort Bliss, Welch added. Boys and girls have access to outside recreation, but Welch said the minors reported spending much of their time near their cots.

“A number of girls described to me situations where day in and day out they would just sleep during the day because there was nothing else to pass the time,” Welch said, noting the prolonged stays at Fort Bliss negatively affected the emotional well-being of children.

Some children told Welch they had trouble sleeping at night because of the cold, dust inside the facility and the wind rattling the tent’s metal frame.

According to internal government documents, the Biden administration is planning to expand bed capacity at Fort Bliss to be able to house 10,000 children there, including up to 5,000 “tender age” minors under the age of 12. The documents note that Fort Bliss does not have enough youth care workers for the number of minors currently housed there.

Dallas CBS affiliate KTVT-TV reports the Fort Bliss shelter is being managed by a private firm under a $614 million contract.

“Rapid Deployment Inc., meanwhile, has received two large contracts totaling $614 million to manage a site in Fort Bliss, Texas, that is emerging as the largest of its kind and could expand to 10,000 beds, according to government solicitation documents.”

Biden put Kamala Harris in charge of fixing the root causes of the border crisis. Neither Biden nor Harris have had the courage to travel to the border to see firsthand the trauma and abuse they have put the migrant children through, let alone the damage done to American citizens and national security.