AOC Goes Soviet on MTG, Accuses Marjorie Taylor Greene of “Fixation”: “This Is a Woman Who Is Deeply Unwell and Clearly Needs Some Help”

Communist Rep. Alexandria Ocasio-Cortez (D-NY) played a card from the old Soviet Union against patriotic conservative rival Rep. Marjorie Taylor Greene (R-GA) on Friday, telling Congressional reporters that Greene has a “fixation” on her and is “deeply unwell and clearly needs some help” after a two years old video was posted by CNN showing then private citizen Greene participating in a peaceful protest outside the then freshman AOC’s Congressional office. The video was posted following an incident earlier this week where Greene confronted Ocasio-Cortez about her support for terrorists and her ducking a debate on the Green New Deal. 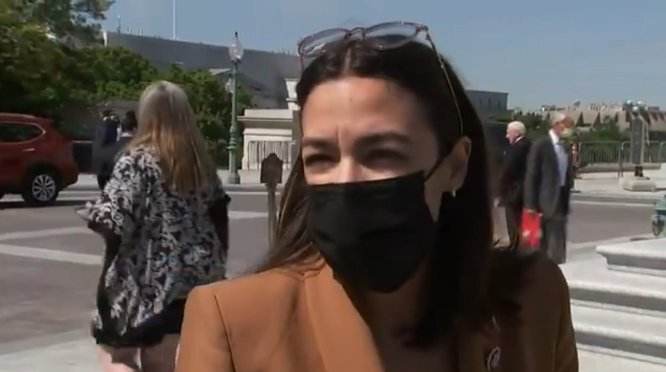 AOC (questions omitted): “Yeah, I, it, it, um, seems as though she’s been posting some vid–I mean, this is a woman that’s deeply unwell. Um, and clearly needs some help. I, you know, I, and her kind of fixation has lasted for several years now. Um, you know, it’s at this point I think the, the depth of that unwellness has raised concerns for other members, um, as well. And so, you know, I think that this is an, an assessment that needs to be made by the proper professionals…Yeah, you know, it’s um, she does keep discussing this (a debate), but it’s, it’s not a thing, you know. And so I’m concerned about her perceptions of reality…I mean a couple of weeks ago, uh, she approached me on, on the uh, floor of the House. Um, but aside from that, no. This has, this has just kinda come from nowhere….Uh, again I think that’s an assessment for the Ethics Committee.”

“This is a woman that’s deeply unwell and clearly needs some help. … At this point, I think, the depth of that un-wellness has raised concerns for other members. … I’m concerned about her perceptions of reality.” pic.twitter.com/hNDYuWj6Di

Excerpt from AP report from 1988 on how the Soviet Union suppressed dissidents with false claims of mental illness.

Psychiatry was systematically used in the 1970s to suppress Soviet dissidents by declaring them mentally ill and committing them to asylums, a doctor wrote in the first article printed by state-run media to acknowledge such abuses.

″The leadership was content: in our country there were no dissidents – there were only insane people,″ Mikhail I. Buyanov, a psychiatrist and neurologist, wrote in his historical survey of Soviet psychiatry, published by the educational newspaper Uchitelskaya Gazeta.

This is what AOC wants done to MTG to remove her from Congress.