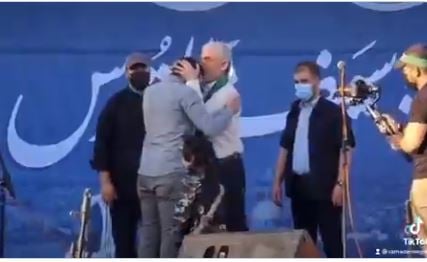 Osama and his son were honored by Hamas officials before their death.

Many are retweeting this but don’t seem to know the backstory. The child here and the young man being kissed by Hamas leader Sinwar are apparently linked to Osama al-Zebda and his father Jamal al-Zebda, a commander and engineer; they are honored as relatives of the “martyrs” https://t.co/oE2qgWdTqa

The report notes that al-Zebda was on a US terrorist watch list. His son was featured in videos with Hamas commander Yahya Sinwar on Monday, in which the Hamas commander puts a rifle in the toddler’s hand. His death and the death of his father, a well-known Hamas engineer, have been featured on Palestinian media.